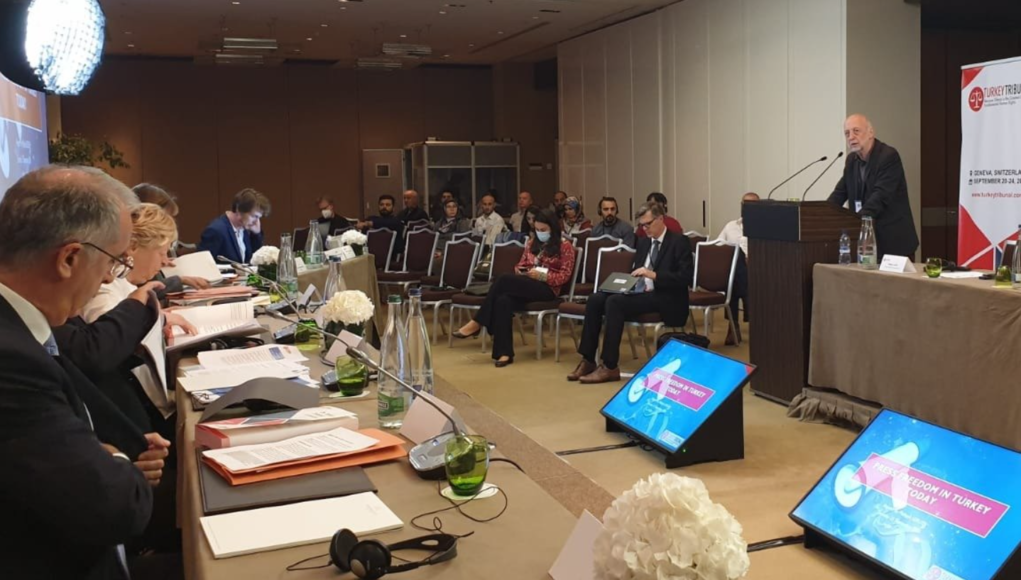 The judges of the Turkey Tribunal, a civil society-led, symbolic international tribunal established to adjudicate recent human rights violations in Turkey, on Tuesday heard rapporteur Philippe Leruth present a report on press freedom that claimed Ankara’s ulterior purpose behind its counterterrorism activities was the silencing all critical voices in the country.

“The legal restrictions, the administrative measures of blocking and expropriating, the judicial persecutions and convictions have collectively destroyed freedom of the press in Turkey,” the report said, adding that the lack of press freedom meant that Turkey is not a democracy and can be considered at best as “a competitive authoritarian system.”

Answering the question of whether Turkey guarantees a sufficient degree of freedom of the press and freedom of expression, Leruth enumerated a number of points starting from Ankara’s record before the European Court of Human Rights (ECtHR).

“Turkey has been condemned for violation of Article 10 of the European Convention on Human Rights [ECHR] by the ECtHR 154 times since 2000. This is a significant number of times,” Leruth said.

“Our report shows many prosecutions and convictions for insult or defamation of the president or the state. The Mission Report of the Joint International Press Freedom Mission mentions 12,300 cases from 2014 until 2017 alone,” the rapporteur underlined, adding that this is clearly in violation of the guarantees of freedom of expression enshrined in Article 10.

The report said Turkey is one of the “undisputed leading jailors of journalists worldwide,” and added, “Closing down around 200 media outlets, having blocked more than 400 000 websites, and organising a strict system of authorizations for classical radio and for online broadcasters again is in clear contradiction with human rights, in particular Article 10  [of the] ECHR.”

“Against this background, it can be concluded that Turkey cannot currently be considered a country within which a sufficient degree of freedom of the press and freedom of expression is guaranteed,” Leruth said, adding, “Turkey is not acting in compliance with the standards of a functioning democracy because a functioning democracy without an effectively guaranteed freedom of the press is impossible.”

Answering the question of whether the Turkish government’s decisions curtailing press freedom can be justified by its reaction to a 2016 coup attempt, Leruth said Turkey’s crackdown on the free press predates the failed coup and that it merely served as an “excellent opportunity” to silence critical voices.

President Recep Tayyip Erdoğan’s Justice and Development Party (AKP) government increased its crackdown on critical media outlets and journalists in the aftermath of a coup attempt in July 2016, following which dozens of journalists were jailed, while more than 200 media outlets were closed down under the pretext of an anti-coup fight.

Turkey has been ranked 153rd out of 180 countries in the Reporters Without Borders (RSF) 2021 World Press Freedom Index, up from 154th last year after it replaced Belarus, “the most dangerous country in Europe for media personnel,” according to the report.