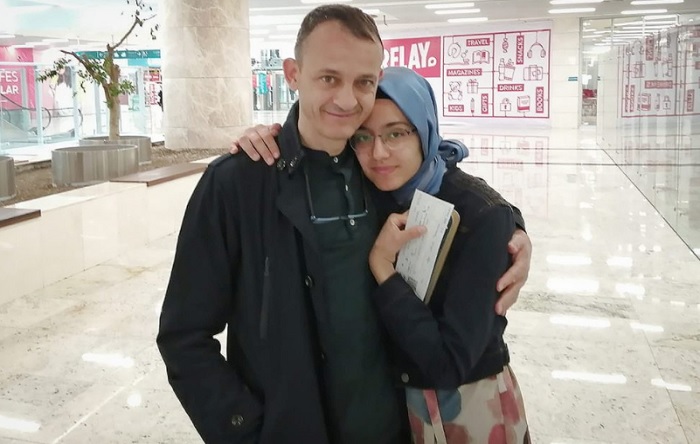 A former Turkish bureaucrat who had been missing since late 2020 and was suspected of being a victim of enforced disappearance has been found and is currently in a prison in Ankara, according to his daughter.

“Yesterday I got a call [informing me] that my father was in prison. I waited for some time to confirm it, but I can share the news now. My father is alive,” announced Nursena Küçüközyiğit, the daughter of Hüseyin Galip Küçüközyiğit, on Twitter on Tuesday.

Since the disappearance of her father on December 29, Nursena had been campaigning on social media, going from one courthouse to another and knocking on the doors of local and international human rights organizations in a bid to find her father and make sure that an effective investigation was carried out to locate him.

“I only know that my father is alive. I am very happy. We had been waiting for this news for a long time. We got it today. My father is in a quarantine cell at Sincan L-type Prison,” Nursena said in remarks to the Kronos news website.

The young woman said the news about the location of her father was first given to her grandmother by someone who introduced himself as a police officer in a phone call at around 1 a.m. on Tuesday. “Your son has been arrested. He is in Sincan Prison now. You can come and visit him,” the police officer told the grandmother, according to Nursena.

Hüseyin Galip Küçüközyiğit was a successful lawyer who served as the chief legal counsel for the Turks Abroad and Related Communities Agency (YTB). He was fired from his job by a government decree in the aftermath of a coup attempt in July 2016. He was later sentenced to six years, three months in prison for “membership in a terrorist organization” due to his alleged ties to the Gülen movement, a faith-based group inspired by Turkish cleric Fethullah Gülen. Küçüközyiğit was released from pretrial detention pending appeal.

In May Nursena filed an application with the European Court of Human Rights requesting an interim measure concerning her father’s case after Turkey’s Constitutional Court rejected a similar request.

Nursena said since she has not yet visited her father in prison, she has no idea how he is doing and what kind of treatment he was subjected to.

She said a regional appeals court as well as the country’s Supreme Court of Appeals upheld the prison sentence given to her father while he was missing and that she thinks his arrest is based on these court rulings.

A medical student, she said she had to allocate most of her time to trying to find her father while he was missing and was unable to attend most of the classes at her university. “I will be able to spend more time on my courses now,” she added.

The news about Küçüközyiğit prompted many to question what might have happened to the former bureaucrat during the time he was missing.

Ömer Faruk Gergerlioğlu, a lawmaker from the pro-Kurdish Peoples’ Democratic Party (HDP) and a prominent human rights activist, tweeted: “I wonder how will the state answer the question of where he was for nine months. Camera footage showed he was being followed by three people.”

Dismissing the investigations as a Gülenist coup and conspiracy against his government, Erdoğan designated the Gülen movement as a terrorist organization and began to target its members. He intensified the crackdown on the movement following the coup attempt, that he accused Gülen of masterminding. Gülen and the movement strongly deny involvement in the abortive putsch or any terrorist activity.

Amnesty International issued an urgent call for action at the beginning of February for a thorough investigation of Küçüközyiğit’s disappearance.

Nearly 30 people have reportedly been abducted by Turkish intelligence since 2016. Most of the abductions targeted members of the Gülen movement. Many of the abductees mysteriously reappeared in police custody in Ankara after six to nine-month absences.

Apparently intimidated, most of them had kept their silence after their reappearance. Speaking at a court hearing in February 2020, one of the abductees, Gökhan Türkmen, revealed that he had been held incommunicado at a black site in Ankara run by Turkey’s intelligence agency and subjected to severe torture during his 271-day stay. Türkmen was the object of threats and was sexually harassed and abused during his enforced disappearance. He also alleged that he was visited in prison and threatened no less than six times by officials who introduced themselves as intelligence officers, pressuring him to retract his allegations of abduction and torture made at the February hearing.