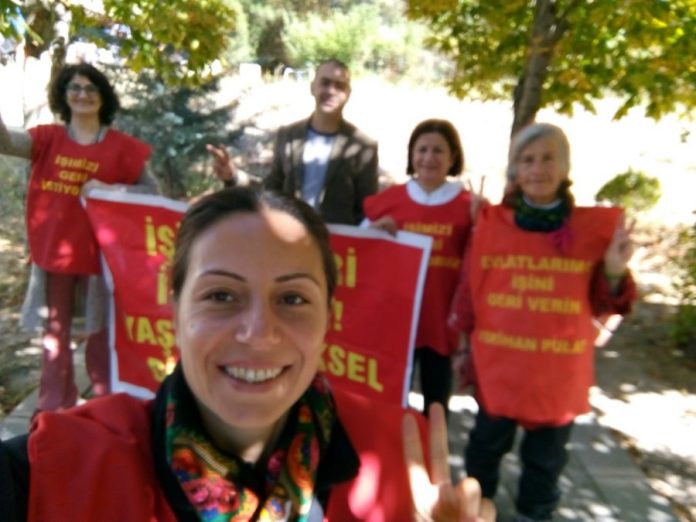 A former public servant previously dismissed from her job with an executive decree said a group of men identifying themselves as police tried to abduct her, the Stockholm Center for Freedom reported, citing Turkish media.

Alev Şahin said four police officers surrounded her while walking to her home on Friday, telling her they needed to take her to the police station for “missing testimony.”

“I was stopped in the middle of the street by people who told me they were police officers,” she said on Twitter. “They told me I needed to come to the police station with them, but I said I would only come with my lawyer. Then their van approached and they tried to force me inside, but I resisted, fearing they were going to abduct me.”

The officers left after she called her lawyer.

Şahin was part of a group of protestors who regularly gathered in front of the human rights monument on Ankara’s Yüksel Street, demanding their jobs back. They were summarily fired during a state of emergency declared in the aftermath of a coup attempt in 2016 for alleged membership in or relationships with “terrorist organizations” by emergency decree-laws subject to neither judicial nor parliamentary scrutiny.

Turkish police have notoriously used excessive force against the protestors on Yüksel Street.

Şahin said she later tried to get the CCTV footage of that day from shops and apartments in the area but learned that all the records were either retrieved or deleted by individuals who identified themselves as police officers.

Şahin filed a complaint with her lawyer and Ömer Faruk Gergerlioğlu, a human rights activist and deputy from the Peoples’ Democratic Party (HDP). She gave a statement to the press in front of the courthouse saying she would not be deterred by such threats and would continue her fight to get her job back.

Gergerlioğlu said intimidation of government critics and abductions had become commonplace. “The police cannot operate in such a manner,” he said. “We are at a point where critics cannot even walk in the streets without feeling worried for their safety.”

He added that he would submit a parliamentary question addressing the Interior Ministry concerning the incident and the abduction of critics.

Many government critics reported being intimidated by people identifying themselves as police officers. Some were followed and taken into custody without the knowledge of their lawyers or families only to reappear days and even weeks later.