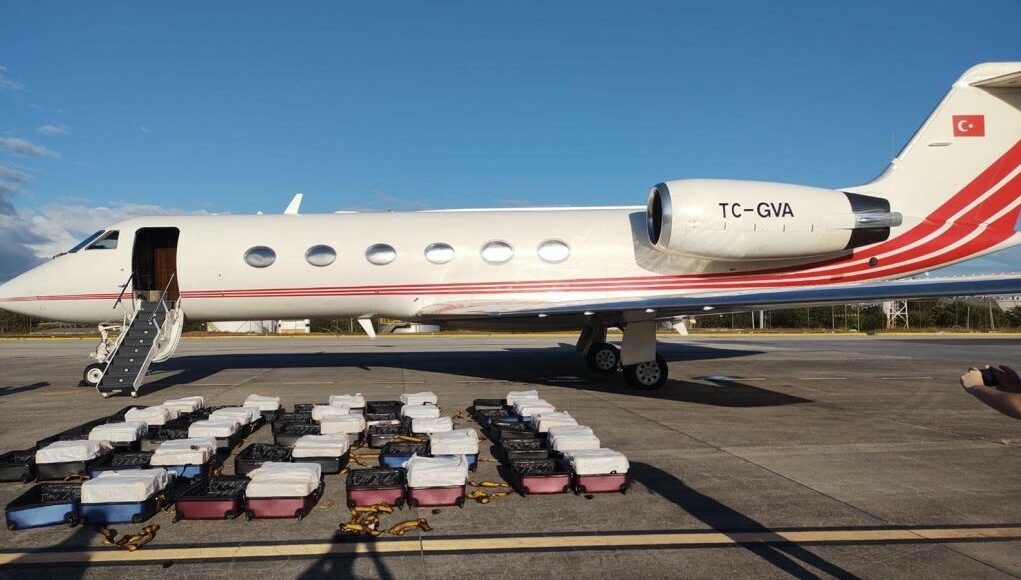 Brazilian police on Wednesday seized 1.3 tons of cocaine stashed in suitcases on a private jet belonging to Turkish carrier ACM Air and leased by a Spanish passenger, the Gazete Duvar news website reported.

“Dozens of suitcases containing cocaine were seized in a Turkish business jet. Cocaine, reportedly belonging to a passenger who was flying from Fortaleza Airport in Brazil to Brussels, Belgium, was confiscated. The passenger and pilots were taken into custody,” Kıdık tweeted.

In the video Brazilian police officers are seen questioning the Turkish pilot about a suitcase, and the pilot says it belongs to Valdes. Then the police ask the Spanish passenger to open the suitcase. The police officers conduct a quick test on the powder in the suitcase and confirm that it is cocaine.

ACM Air released a statement in which it denied any responsibility for the cocaine found on its jet.

“We would [like to] inform the public that the customer in question and his personal belongings are not connected in any manner to our company or our air crew, and the responsibility for checking passenger belongings lies completely with the airport authorities, and our air crew and plane will be brought to Turkey as soon as possible after the completion of the legal proceedings,” the statement said.

The Brazilian police’s crackdown on drug smuggling came after Turkish mob boss Sedat Peker had revealed the alleged involvement of Turkey’s ruling Justice and Development Party (AKP) in international cocaine trafficking, claiming that Turkey had become part of a new route for cocaine smuggling thanks to the efforts of the Turkey’s ruling politicians.

Erkan Yıldırım, son of former vice president Binali Yıldırım, who is currently deputy chairman of the AKP, was part of a major drug trafficking ring involving Venezuela and Turkey, Peker had claimed in a recent video posted on YouTube.