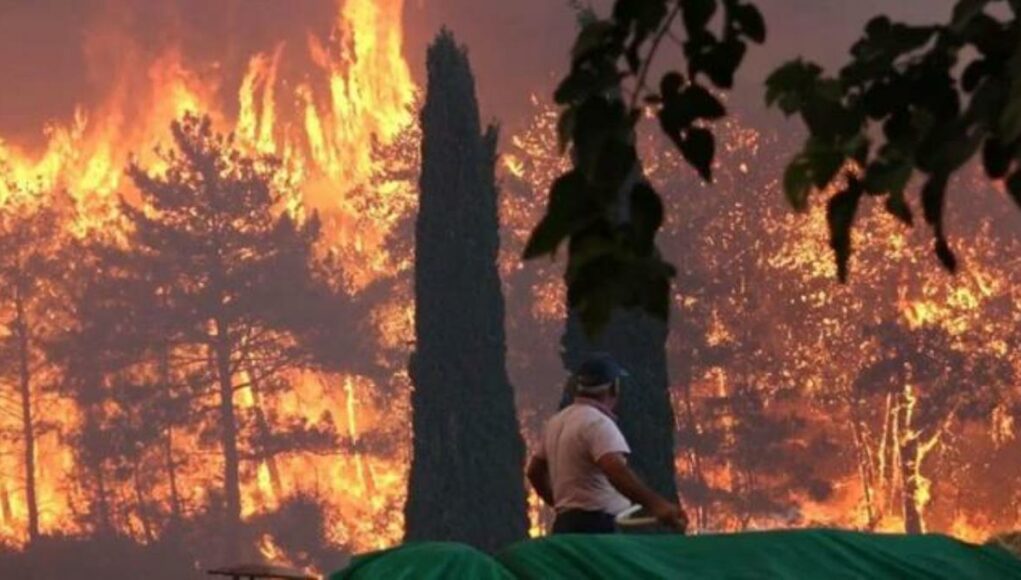 Three people, including an 82-year-old who lived alone, were reported dead and more than 100 injured as firefighters battled blazes engulfing a Mediterranean resort region on Turkey’s southern coast, Agence France-Presse reported on Thursday.

Turkey’s Disaster and Emergency Management Presidency (AFAD) on Thursday said three people were killed and 122 more were injured by fires that have continued to rage in the Yeniköy, Kalemler, Sarılar, Bahçelievler and Sorgun neighborhoods of Manavgat since around noon on Wednesday.

AFAD also said 58 people were being treated in local hospitals.

The Sülek neighborhood, four kilometers from the town center, was evacuated after the flames, fanned by strong winds that had blown during the night, reached the area, Turkish media reports said.

Agriculture Minister Bekir Pakdemirli, who made a press statement in the early hours of Thursday, said the fire was likely to affect an area of up to 2,400 hectares. “We had predicted it would affect 600 hectares in the evening. We now predict that it will be at least three or four times more than that,” he said.

The fires, which affected a sparsely populated region about 75 kilometers (45 miles) east of Antalya — a resort especially popular with Russian and other Eastern European tourists — has completely destroyed at least 20 buildings while damaging many other houses, workplaces, barns, farmland, greenhouses and vehicles.

Pakdemirli also stated that an investigation had been launched regarding the cause of the fire in Manavgat over suspicions that it was the result of arson.

Antalya Mayor Muhittin Böcek previously said he suspected foul play because the fires started in four locations at once. “This suggests arson, but we don’t have clear information about that at this stage,” he said on Wednesday.

Fires have also recently erupted in the southern provinces of Adana, Mersin and Osmaniye, according to local media reports.

Pakdemirli also said the fire in Mersin had spread to an area of nearly 1,000 hectares and caused four neighborhoods to be evacuated as a precaution.

Wildfires are common in Turkey’s Mediterranean and Aegean regions during the arid summer months, although some forest fires have been blamed on arson.