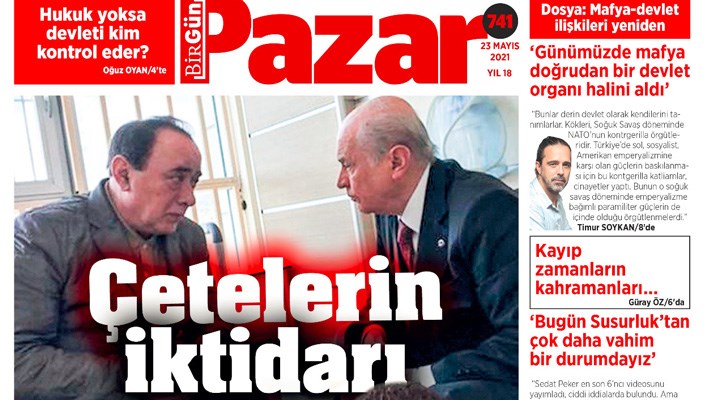 Turkish prosecutors have launched an investigation into the opposition Birgün newspaper on allegations of insulting Turkish President Recep Tayyip Erdoğan and his far-right election ally in a report on the government’s relationship with the mafia, Birgün reported on Thursday.

The investigation was launched due to a report published in the daily’s Sunday supplement on May 25, featuring a photo of Erdoğan ally Devlet Bahçeli, leader of the Nationalist Movement Party (MHP), with mafia boss Alaadin Çakıcı and a photo of Erdoğan with criminal gang leader Sedat Peker.

The photo was taken when Bahçeli visited Çakıcı, who was serving time for a number of crimes, at a hospital in Kırıkkale in May 2018 after he was admitted for health problems.

Çakıcı, who had been convicted of establishing and leading a criminal organization, masterminding a murder, instigating an assault and insulting President Erdoğan, with each carrying a lengthy prison sentence, was released from prison in April 2020 as part of a law that eased overcrowding in the country’s prisons amid the COVID-19 pandemic.

Birgün ran the headline “The rule of the gangs,” with the Bahçeli-Çakıcı photo in addition to a photo of Erdoğan with Peker, who has been shaking theTurkish politics with his statements since early May about the shady relationship between the mafia and state actors. Having fled to Dubai, the mafia boss has been making shocking revelations in his YouTube videos about state-mafia relations, drug trafficking and murders implicating state officials and their family members.

The daily is facing charges of insulting a public official, Bahçeli, and insulting the president, Erdoğan, with its story.

Birgün’s politics editor Mehmet Emin Kurnaz has testified to prosecutors at the İstanbul Courthouse as part of the investigation.

Turkish journalists are often targeted and jailed for their professional activities. Turkey is one of the world’s biggest jailers of professional journalists and ranked 153rd among 180 countries in terms of press freedom in 2021, according to Reporters Without Borders (RSF).