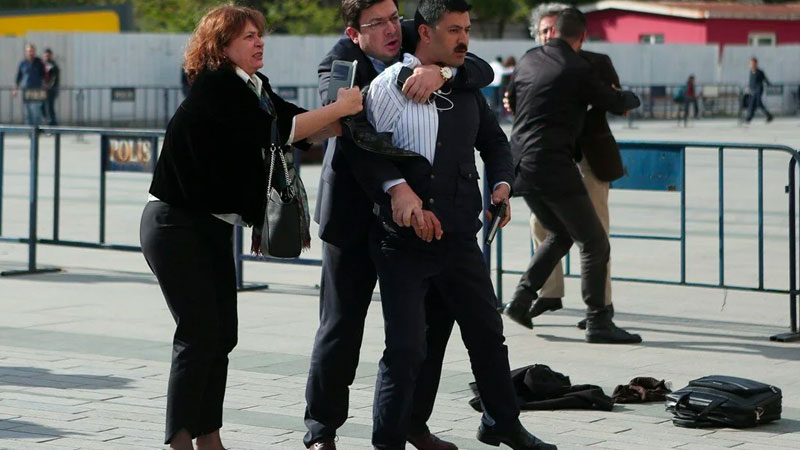 A Turkish court has given a suspended jail sentence of three years to a man who attacked opposition journalist Can Dündar in front of a courthouse in İstanbul in 2016, the T24 news website reported on Thursday.

The incident took place on May 6, 2016 in front of the İstanbul Courthouse. While Dündar, who was the editor-in-chief of the opposition Cumhuriyet daily at the time, narrowly escaped being shot, Yağız Şenkal, a reporter for NTV, was injured in the leg. Dündar’s wife Dilek was the first to intervene, grabbing the assailant by the collar and preventing him from leaving the scene.

The incident took place following the fourth hearing of a trial dealing with stories published by Cumhuriyet about Turkish intelligence trucks allegedly bound for Syria with hidden weapons in early 2014.

The gunman, Murat Şahin, approached Dündar as he was speaking to reporters during the break. He fired two shots at Dündar’s legs, saying, “You are a traitor.” Şahin was detained following the attack.

He was later indicted on charges of threatening a person with a gun, causing injury and carrying an unlicensed weapon. An İstanbul court on Thursday gave Şahin a suspended sentence of three years, 15 days and a fine of TL 500 ($57). The court handed down the reduced sentence due to good behavior in the courtroom.

Dündar, who fled Turkey in 2016 and has been living in Germany since then, expressed outrage about the sentence given to Şahin.

“There are some very good judges, aren’t there? The man who fired at me was given a prison sentence of three years, 15 days and a fine of TL 500. … A compassionate judge reduced his sentence due to good behavior and suspended it. The guy was already not under arrest. Let all assassins know this,” Dündar tweeted on Thursday following the ruling.

Following the attack, Dündar and Erdem Gül, Cumhuriyet’s then-Ankara bureau chief, were convicted and sentenced to five years, 10 months and five years in prison, respectively. The journalists were tried for “leaking state secrets” due to the stories about the Turkish intelligence trucks bound for Syria.  They were arrested on Nov. 26, 2015, and released on Feb. 26, 2016 following a Constitutional Court decision.