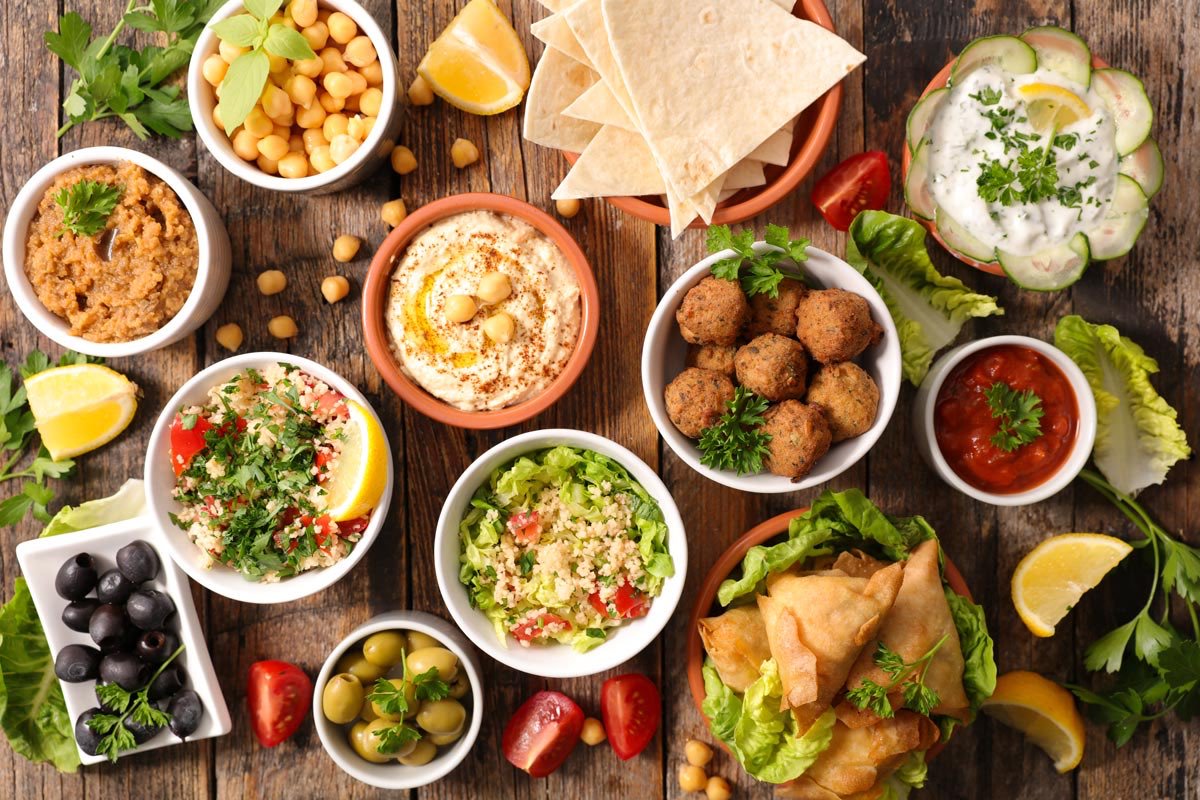 Silva Özyerli, the author of “Amida’nın Sofrası (Amida’s Table), is known for her interest in Armenian and regional cuisine and liqueur production. Özyerli was born in Diyarbakır and spent her childhood there, until she was sent to school in Istanbul.

Writing about the culinary culture of Diyarbakır and her childhood and family memories, Özyerli also touches on topics such as being a part of a Christian minority in the city, hostility and conflicts between ethnic communities in the region, displacement and other political events and their impact on people’s lives.

In addition to memories the book, first put out by Aras Publishing in 2019, includes 125 recipes from Diyarbakır accompanied by photographs by Erkin Öz. The book’s fourth edition was released last week.

Turkish Minute spoke with Özyerli, who has been living in Istanbul since 1982, about her reasons for writing the book and Armenian culinary culture in Turkey. According to Özyerli, the idea had been in her mind for many years, but she didn’t act on it until recently.

“I always felt it a pity that some groups, such as Armenians and Syriacs, who had contributed to the shared culture of Diyarbakır, were most of the time ignored by the official history and cultural representations. So I decided to write and reveal the unknown. Writing became my ‘resistance’ to such ignorance of Armenians’ contribution to culture, the arts, architecture and cuisine,” says Özyerli.

“Amida’s Table” is not simply a cookbook; it also presents a retrospective narration of Diyarbakır and its culture, citing the words of the author’s ancestors as childhood narratives. On the other hand, Özyerli’s book offers the history of Diyarbakır through an Armenian kitchen. The recipes are accompanied by stories of the daily life of Armenians.

Özyerli is a daughter of an Armenian stoneworker who was the son of survivors of the Armenian genocide. She says, thinking about her ancestors and their painful path, she wanted to fight against Armenians’ cultural loss and immortalize their neighborhood in Diyarbakır.

“My family sent me and my sister to Istanbul for our primary education in an Armenian boarding school. I was 7 years old. They wanted us to remain Armenian because we were losing our identity in Diyarbakır,” she said.

Political events such as tensions in Cyprus between Greeks and Turks during the ’60s and ’70s and Turkey’s minority policies have a place in Özyerli’s narrative as part of her family’s story and their influence on their daily meals.

“We were very afraid in those years. We were living with Turks and Kurds, and we were under pressure for being Armenian. When we Armenian kids were playing in the streets, other kids would make a cross with their fingers and yell at us to spit on it. We Christians were gavours [infidels] in Diyarbakır, but when we finally moved to Istanbul, the Istanbul Armenian community called us ‘Kurds’ because according to them, we were villagers, we were Kurds,” says Özyerli.

She continued to visit her family in Diyarbakır during vacations when she was a student in Istanbul, but in 1982 because of the worsening political situation and security problems in their hometown, the family decided to settle permanently in Istanbul.

Özyerli thinks Armenians from the eastern cities of Turkey such as Diyarbakır and Malatya forgot their local Armenian traditions and tried to learn and practice Istanbul Armenians’ traditions.

“After settling in Istanbul, we started to make what Istanbul Armenians make for celebrations: topik [an appetizer prepared with chickpeas, onions, tahini and spices] for New Year’s, and midye dolma [stuffed mussels] for Easter, but I suddenly realized I had started to forget the recipe for Diyarbakır paska bread. Now I’m trying to keep alive both traditions and special foods in Istanbul.”

According to Özyerli, to become accepted by the community in Istanbul, they – Armenians from eastern cities — started to cook like Istanbul Armenians. Silva saw the danger of losing the culture of Amida, a fear that also prompted her to write the book.

In Silva’s book there are not only dishes prepared for festive occasions and weddings, but also meals cooked in times of scarcity, such as those her grandmother prepared with limited resources during World War II.

Diyarbakır, one of the biggest cities in Turkey’s mainly Kurdish Southeast, 100 years ago was home to a diverse range of religious and ethnic communities, but decades of violence have driven almost all the minorities away.

Diyarbakır — an ancient city dating back to Roman times and situated on the Tigris River — was home to thousands of Armenians and other Christians in the 19th century. The city has had several names in its long history: Amid/Amida, the old name of the city, is still used in Armenian together with Dikranagerd, which means “city created by Dikran,” in reference to Armenian King Dikran II.

Following massacres carried out by Muslims between 1895 and 1915, those who were not killed either fled abroad or converted to Islam and assimilated because of Turkish state policies.

Concentrated in Sur, an ancient district of labyrinthine streets, only a few hundred Armenians remained in the city, and unfortunately most of them, like Silva Özyerli’s family, left in the 1970s or early ’80s.

Amida was home to Arabs, Armenians, Jews, Kurds, Syriacs and Turks, but this diversity did not last and was replaced by cultural fights – mainly between Kurdish and Turkish parties — to show who the owner of the city was.

In 2016 the siege of Sur took place, part of the Kurdish-Turkish conflict in Diyarbakir, lasting for more than three months and destroying much of the neighborhood. Heavy artillery and machine guns were utilized in clashes between the Turkish army and police and Kurdish militants.

A report by Turkey’s main opposition Republican People’s Party (CHP) revealed that by late February 2016 about 80 percent of all buildings inside the Sur curfew zone had been destroyed and that most people had left even the intact parts of the neighborhood for fear of the violence. At least 25 people were killed in the siege of Sur, with rights groups claiming the death toll to be more than 200.

According to Amnesty International, more than 200,000 people lived in the affected areas and some were unable to access food and medical care and faced severe electricity and water shortages. More than 70 residents and at least seven soldiers and police officers were reported killed.

“My home, my streets, have disappeared one by one in recent years, but my memories remained intact. They would never be able to dig trenches and erect barricades on my memories nor attack them with guns,” says Özyerli.

“Diyarbakır has a long history with its multicultural, multilingual and multi-faith space. But in recent years I realized that traces of the Armenians were being totally removed. During the siege of Sur I was really very upset. One day I explained my feelings to Rober Koptaş, manager of Aras Publishing. He said I should write about all of it — stories, recipes, cultural loss and my feelings…”

Özyerli listened to Koptaş and as a reaction to the political-based cultural erosion, started to write her book to remind readers of the old diversity of the city and its villages. Her main focus was Gâvur Mahallesi (Infidels Quarter), where she was born and spent her childhood.

The name Gâvur Mahallesi was given to the district, now officially called Hasırlı, by the Muslim population because it was inhabited largely by non-Muslims. Mıgırdiç Margosyan’s well-known book, “Gâvur Mahallesi,”which includes short stories about the district, is the main literary work on the neighborhood.

Aras Publishing has worked to introduce Armenian literature, culture, history to the people of Turkey as an active contributor to cultural life since 1993. To date has published more than 250 books in both Western Armenian and Turkish.

In 2019 Aras opened the Yesayan Room, designed as a multi-purpose venue, to hold a variety of events, from talks to panel discussions, recitals, film screenings, workshops and gatherings. Named after Armenian feminist writer Zabel Yesayan, the room is defined as a place for discussion, dialogue and collaboration.

In Özyerli’s book, kitchen and food have both social and symbolic value. The first chapter of “Amida’s Table” is dedicated to bread – the most sacred of all food.

‘We were raised believing that bread was the holiest of all food, no matter what it was called: ekmek in Turkish, hats in Armenian, nan in Kurdish — bread was after all a blessing of God, who gave life to the wheat,” says Özyerli.

Özyerli thinks food has the power of unity. “It can bring together people from different ethnic, cultural and religious communities. I believe food does not belong to a specific ethnicity like Armenian, Kurdish, Syriac or Turkish, but a land. Food can unite, not divide, people because the kitchen belongs to the land…”

In “Amida’s Table” the author shows that the kitchen is her main means of resistance. “Thanks to my mother Zora, I understand that when you put on an apron and started to cook, it was never simply meant as food but more. It was a way of enduring, of preserving culture and tradition. It was a way of keeping alive the memory, the existence and the creation.”