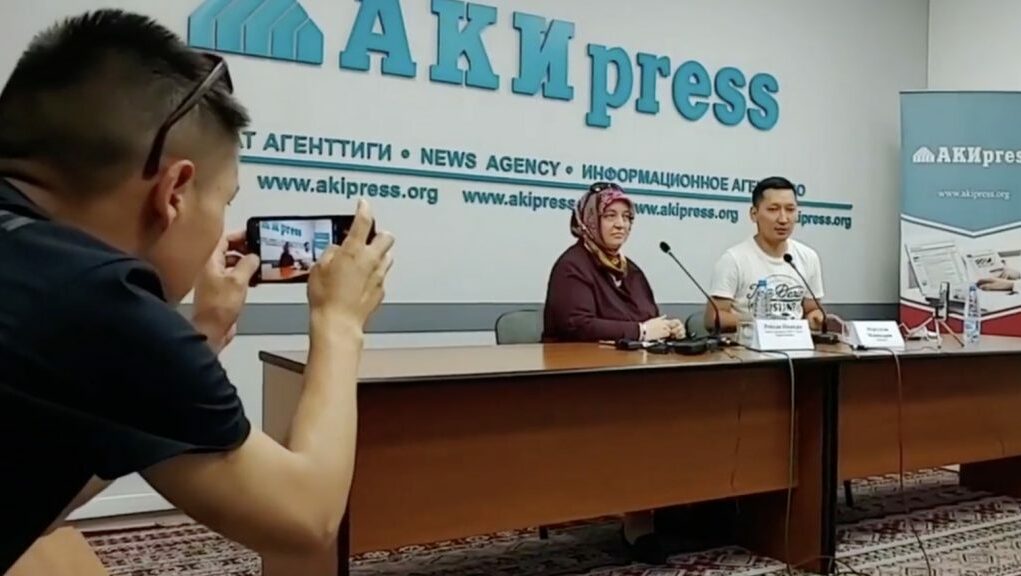 The wife of the president of a prestigious school network in Kyrgyzstan who went missing in Bishkek on Monday said she has concerns about her husband being subjected to maltreatment and torture by his abductors.

Orhan İnandı, the founder and president of the Turkish-Kyrgyz Sapat school network operating in Kyrgyzstan, went missing in Bishkek on Monday evening and is feared to have been abducted by Turkey’s National Intelligence Organization (MİT) due to his alleged links to the Gülen movement.

Turkey claims the founder of the school network is Turkish Islamic cleric Fethullah Gülen, whose movement is accused by the Turkish government of masterminding a failed coup in Turkey in July 2016. The movement strongly denies any involvement in the coup attempt.

İnandı’s wife, Reyhan, who spoke at a news conference on Thursday, said: “It’s a race against time [to find him]. We know nothing about what happened to him, how he is and where he is. I am concerned about him being tortured.”

The İnandı incident follows the enforced disappearance of nearly 30 people with real or alleged links to the Gülen movement since the coup attempt as Turkish President Recep Tayyip Erdoğan has stepped up pressure on foreign governments to hand over Gülen-linked persons since the failed coup. When countries resist Erdoğan’s pressure to deport or extradite Gülen-linked people, MİT carries out overseas operations to forcibly bring them back to Turkey, where they face prosecution on terrorism charges.

Some of the enforced disappearance victims in Turkey have spoken out in court after they were found in police custody, recounting the systematic and severe torture they were subjected to during their interrogation by government operatives, who, victims said, waited until their wounds had healed to hand them over to the police.

Reyhan İnandı also said she has faith that the Kyrgyz government will do whatever it can to find her husband.

Thursday’s news conference, which took place at the Bishkek Akipress Media, was also attended by two lawyers from the Sapat schools and a member of an alumni association.

İnandı’s alleged abduction by Turkey prompted many Kyrgyz including students and parents from the Sapat schools to hold protests, demanding the educator’s release. The protests mostly take place in front of the Turkish Embassy in Bishkek where İnandı is believed to be held.

Reyhan İnandı said she and her husband have always felt safe in Kyrgyzstan, where they have been living for more than two decades and raising their four children, adding that the security provided by the Kyrgyz state wasn’t with him when he disappeared.

The woman said Orhan İnandı’s security guard accompanied him only during work hours because İnandı thought it was not necessary to have the guard all day.

“He always felt himself safe here. I go out walking at 12 a.m., and I have no fears,” said Reyhan İnandı, adding that her views about Kyrgyzstan and its people have not changed.

Members of the Kyrgyz Parliament, meanwhile, at a parliamentary session on Thursday called on the country’s interior minister, Ulan Niyazbekov, to make a statement about the disappearance of İnandı

Kyrgyz MP Ulugbek Ormonov said the disappearance of the educator has led to chaos in the country, adding: “The people are in a panic. The president has ordered the relevant authorities to locate İnandı. Nothing has been heard from him for three days. What is happening? The interior minister should make a statement. This is important for the Kyrgyz people.”

Another Kyrgyz MP, Dastan Bekeshev, said the state authorities should make a statement about the disappearance of İnandı because the Kyrgyz people have questions and suspicions about the incident.

“There are reports about his abduction by foreign special forces. I don’t believe that. I want to know what really happened [to İnaldı],” said Bekeshev.

Shailoobek Atazov, another member of the Kyrgyz Parliament, said most of the members of the Parliament send their children to schools established by İnandı. He complained that although it has been three days since his disappearance, the Kyrgyz authorities haven’t issued a statement.

Kyrgyz President Sadyr Japarovo on Tuesday ordered the State Committee for National Security and the Ministry of Internal Affairs to conduct an extensive search to locate İnandı.

According to a recent report by Freedom House on global transnational repression Turkey has become number one among countries that have conducted renditions from host states since 2014. The Turkish government has pursued its perceived enemies in at least 30 host countries spread across the Americas, Europe, the Middle East, Africa and Asia since July 2016.

Mostly recently, MİT arrested and brought back to Turkey Selahattin Gülen, a teacher and a nephew of Islamic scholar Gülen living in Kenya.