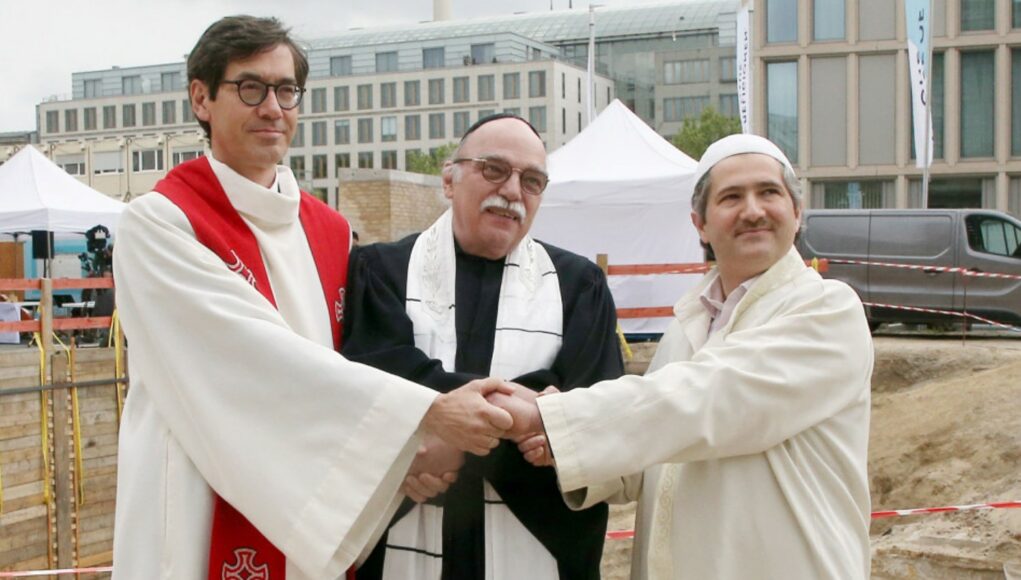 Representatives from the three Abrahamic religions and political leaders in Berlin on Thursday attended a ceremony to lay the foundation of a new multi-faith place of worship called the House of One, aiming to bring Christians, Jews and Muslims together under one roof.

The ambitious project was conceived a decade ago and is scheduled to open by 2025 on Museum Island in central Berlin.

“The idea is bigger than the building,” project director Roland Stolte said at a ceremony to mark the beginning of construction on the site of a former church demolished under the former East German communist regime.

The building will contain three separate places of worship for Christians, Jews and Muslims.

A large communal hall, designed to host events and festivals, will connect the mosque, the synagogue and the protestant church.

Symbolic objects from the three religions were laid in the concrete after an imam, minister and rabbi said short prayers.

The project is estimated to cost around €47 million and is financed in part by the German government and the city of Berlin.

The project initially had difficulty finding a Muslim participant.

The Turkish minority constitutes the largest Muslim group in the country, but the Turkish-Islamic Union for Religious Affairs (DİTİB), an arm of the Turkish government serving Muslims, refused to take part in the project.

A faith-based movement inspired by cleric Fethullah Gülen, the group is accused by the Turkish government of orchestrating a 2016 failed coup in Turkey, a claim strongly denied by Gülen and his followers.

“In these times of polarization, which casts a huge shadow on the world, the House of One embodies the constructive spirit of faith and spirituality,” Kadir Sancı, who will be the imam of the future mosque, said during the ceremony.

Yet, the inclusion of the Gülen movement in the project has drawn the ire of the Turkish government.

“The ‘House of One’ project in Berlin, of which the foundation was laid today (27th May), involves FETO [a derogatory acronym used by Ankara to denote the Gülen movement] terrorist organization despite all the objections of Turkey as well as the Turkish and Muslim communities living in Germany. The project does not serve to bring the three religions together, but ONLY to separate them and to legitimize and support a terrorist organization,” the Turkish Foreign Ministry said in a statement on Thursday.

The Turkish government launched a massive crackdown targeting followers of the faith-based Gülen movement in the aftermath of the 2016 failed coup.