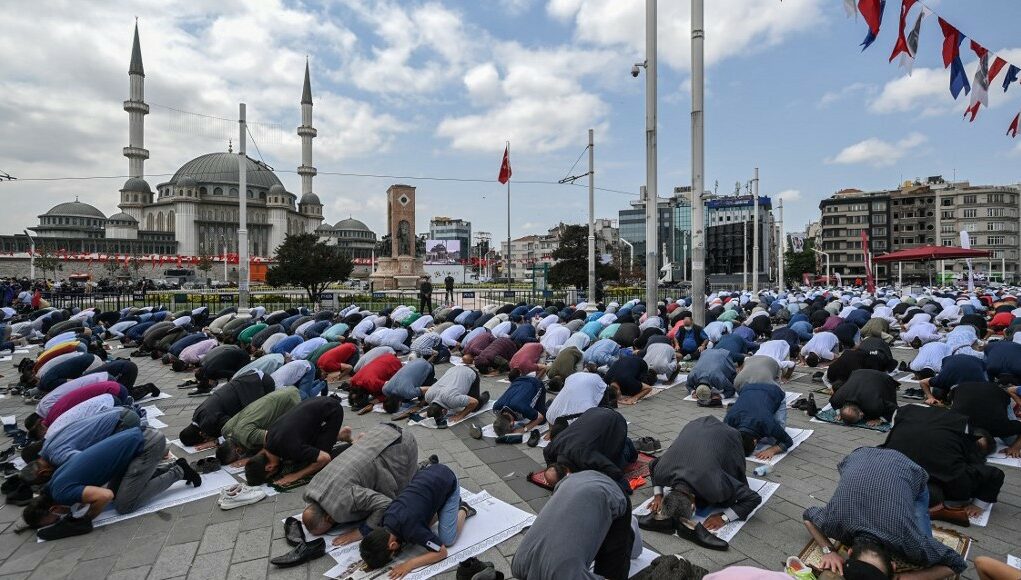 The mosque is Erdoğan’s mark on the square, the most famous area in Turkey’s economic capital, and a fulfillment of a 30-year-old dream.

The opening was met with enthusiasm, with several thousand people praying outside in the square because the mosque filled so quickly, an AFP correspondent said.

Some 4,000 people will be able to pray inside the mosque, which combines Ottoman-style with contemporary features.

When Erdoğan served as İstanbul mayor in the 1990s, he lamented the absence of a mosque in Taksim Square, noting that the only visible religious site was an Orthodox church in an area not too far away.

Although Turkey is a Muslim-majority country, the mosque’s construction, which began in 2017, was criticized, with some opponents accusing Erdoğan of seeking to “Islamize” the country and displace the founder of the secular modern republic, Mustafa Kemal Atatürk.

The new building eclipses the “Republic Monument” in the square, which depicts the important figures of the Turkish War of Independence, including Atatürk.

The mosque was initially intended to be inaugurated during the Muslim holy month of Ramadan.

But Erdoğan, who pays strict attention to dates for events, finally opted to open the mosque on the day when anti-government protests started in 2013.

The square was the center of the protests known as the “Gezi movement” and were met with a heavy-handed response from police.

The opening also comes a day before the 1453 conquest of Constantinople by the Ottomans, a special day for a president who is nostalgic about past glories.

And it is part of Erdoğan’s bid to satisfy his pious and conservative electoral base during a period of growing economic difficulties.