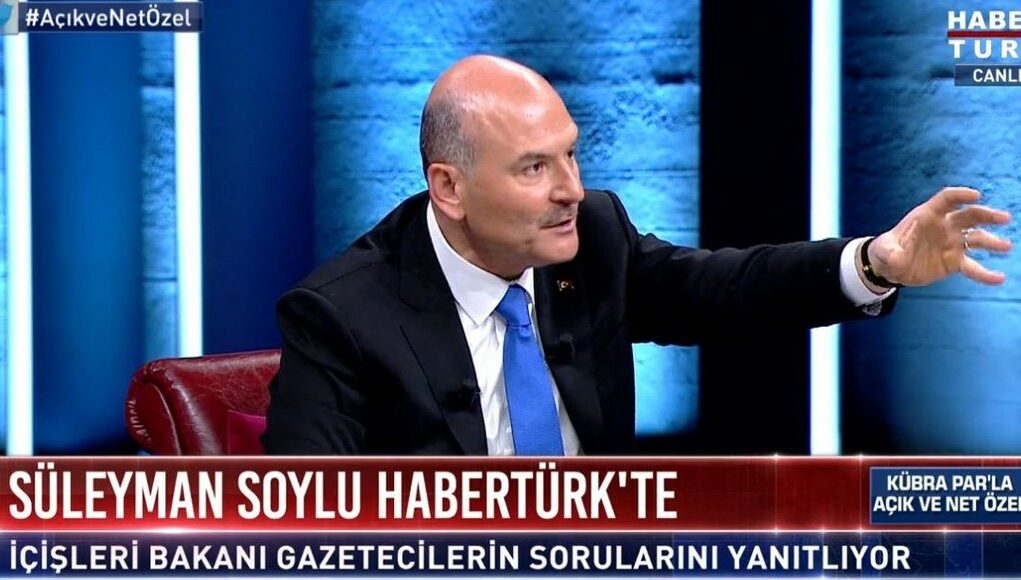 The Turkish interior minister has attracted criticism for failing to give satisfactory answers to allegations by a mafia boss that included revelations about the high-profile killings of two journalists in the 1990s and the role of a former Turkish prime minister’s son in a major drug trafficking ring between Venezuela and Turkey, local media reported on Tuesday.

The questions directed at Soylu concerned the latest allegations made by Sedat Peker, a mobster who fled abroad and has been accusing members of the Justice and Development Party (AKP) government of corruption and other crimes in a series of YouTube posts over the past three weeks.

“Peker’s allegations and slanders are all nonsense,” Soylu said, while claiming that the latest accusations were part of a “filthy plan” against him and the AKP government, which he said cannot be regarded as separate from one another.

Both the minister and the TV station drew criticism from journalists and social media users, who argued that Soylu filled in the three hours of the program by making long statements that had little to do with the allegations, thus preventing journalists from asking him further, worthwhile questions.

Journalist Murat Yetkin said in a column on the Yetkin Report news website on Tuesday that the only thing from the program on Monday night that stuck with him was the question asking whether Soylu would resign, which was repeated several times by the journalists.

“The minister’s answer to that was ‘I’ve never considered it [as an option]’,” Yetkin wrote, arguing that Soylu’s reply was a message for President Recep Tayyip Erdoğan to either openly express his support for the minister or fire him, since he wouldn’t be leaving on his own.

“It was an embarrassing night not only for politics but also for journalism,” anti-government journalist Yılmaz Özdil, a columnist for the Sözcü daily, on Tuesday described the program in a tweet.

Turkish economist Emin Çapa sarcastically said the only good thing about the program was that he had learned that Soylu was in the insurance business, which he said he hadn’t known before.

Veteran journalist Ayşenur Arslan also tweeted a sarcastic comment, saying: “We got it all wrong. According to the format of the program, Soylu had to ask the questions and the journalists had to listen to him.”

Peker on Sunday claimed that former interior minister Mehmet Ağar was the head of the “deep state” in Turkey and that Ağar was involved in the 1993 murder of prominent investigative journalist Uğur Mumcu, who wrote for the Cumhuriyet daily.

He also alleged that the murder of Turkish Cypriot journalist Kutlu Adalı, who worked for the left-wing Yeni Düzen newspaper in Nicosia, had been ordered by Korkut Eken, a former lieutenant colonel and a senior official at the National Intelligence Organization (MIT).

In the same video, the mafia boss further claimed that that the son of ex-Prime Minister Binali Yıldırım, an Erdoğan loyalist, was part of a major drug trafficking ring between Venezuela and Turkey.