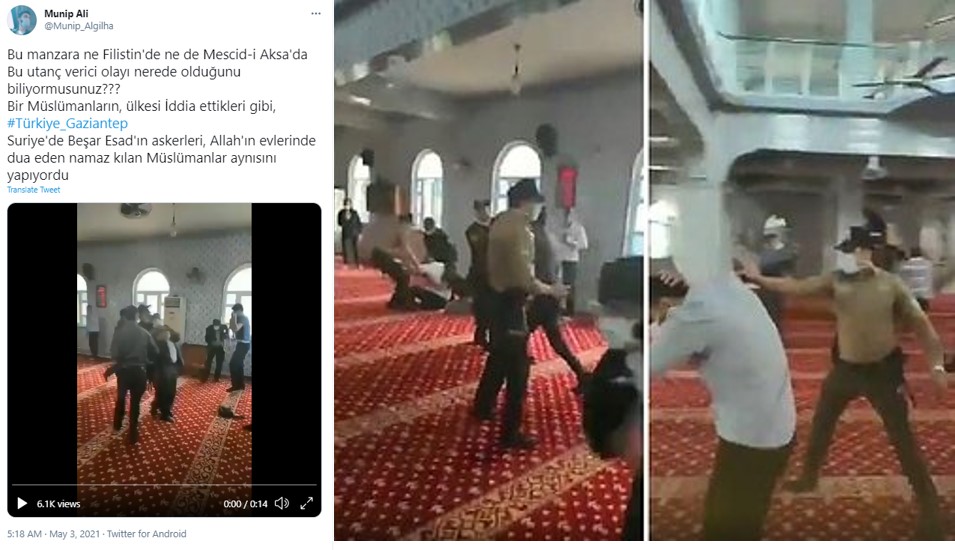 Munip Ali, a Syrian refugee who tweeted criticism of a police raid on a mosque targeting followers of an anti-government religious group, will be deported, the Stockholm Center for Freedom reported, citing the Mezopotamya news agency.

In his tweets Ali compared a video of the raid with another video showing members of the ruling Justice and Development Party (AKP) singing and having fun in violation of COVID-19 protocols requiring masking and social distancing during a trip to an AKP convention.

“This scene is neither from Palestine nor from Al-Aqsa Mosque [in Jerusalem]. Do you know where this shameful incident took place?” Ali asked in his tweet. “In Syria, soldiers of Bashar al-Assad did the same to the Muslims who prayed in the House of God. But if we were to travel to the AKP convention, it would look like this.”

Ali was briefly detained by the police and was released after giving his statement. He was placed under administrative supervision and will be deported. According to his lawyer, Meral Kaban, Ali will be taken to a repatriation center.

“My client was accused of inciting hatred among the public,” Kaban said. “Yet, he exercised his right to freedom of expression.” She said they will appeal the “unlawful” deportation decision.

Turkish police on Monday raided a mosque in the southeastern province of Gaziantep and detained eight followers of an anti-government religious group who wanted to perform a religious ritual peculiar to the Muslim holy month of Ramadan.

The detainees were followers of the Furkan Foundation, whose leader is an outspoken critic of the policies of the AKP.

The police raided the mosque wearing their shoes, which is regarded as disrespectful, and used pepper spray and force to disperse the Furkan followers on the grounds that they were violating coronavirus measures.