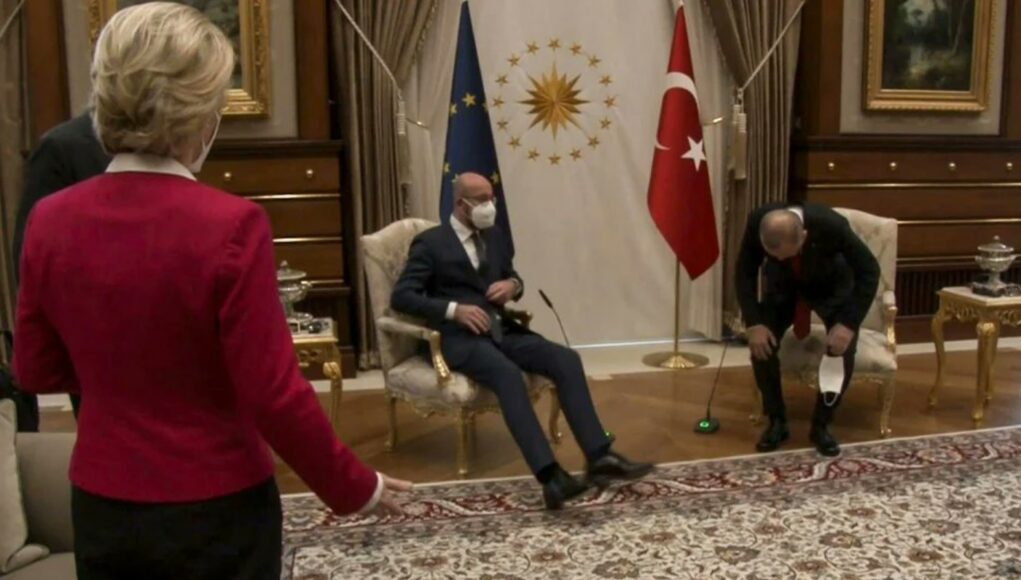 In her most personal comments yet on the incident that has come to be known as “sofagate,” von der Leyen told MEPs, “I felt hurt and I felt alone as a woman, and as a European.”

Much of the commentary on the affair has focused on Turkish President Recep Tayyip’s Erdoğan’s diplomatic faux pas in failing to provide a chair for von der Leyen.

But von der Leyen told the European Parliament that she could see no reason in the EU’s own rules why she should have been treated differently to European Council chief Charles Michel.

Michel was quick to take the single chair set out next to Erdoğan and the EU and Turkish flags, relegating a visibly annoyed von der Leyen to a sofa further away.

“And this is how I expected to be treated when visiting Turkey two weeks ago, like a commission president, but I was not. I cannot find any justification for the way I was treated in the European treaties.

“So I have to conclude that had happened because I am a woman.”

Immediately after the Ankara meeting earlier this month, when footage emerged of von der Leyen’s embarrassment, some European officials stressed that technically Michel is her senior in the diplomatic hierarchy.

But von der Leyen has made clear that she expects to be treated as an equal to her fellow EU chief.

And she said not only must respect for women’s rights be “a prerequisite for a resumption of dialogue with Turkey” but that Europe itself must do better on this front.

Erdoğan has been criticized for withdrawing Turkey from the Istanbul Convention on halting violence against women but, as von der Leyen recalled, several EU members have still not ratified the treaty at all.

“And others are thinking about quitting. This is not acceptable,” she said, warning that she would try to find a way for the EU itself to join the convention despite resistance from some capitals.