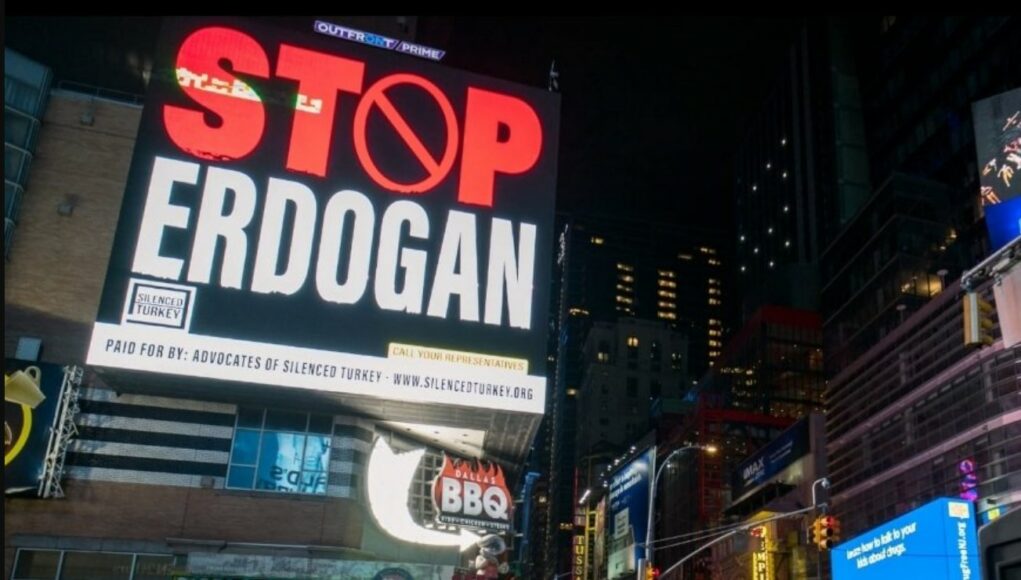 A billboard in New York City’s Times Square that reads “STOP ERDOGAN,” referring to Turkish President Recep Tayyip Erdoğan, whose rule has seen the imprisonment of tens of thousands on politically motivated charges, has drawn the ire of officials from the ruling Justice and Development Party (AKP).

Paid for by Turkish rights group Advocates of Silenced Turkey, a US-based nonprofit focused on addressing human rights violations in Turkey, the sign was branded by AKP spokesperson Ömer Çelik as the work of the Gülen movement, a faith-based group outlawed by Ankara.

Following a coup attempt on July 15, 2016, the Turkish government and President Erdoğan pinned the blame on the Gülen movement, describing it as a terrorist organization.

“FETÖ [a derogatory acronym referring to the Gülen group as a terrorist organization] is an enemy of Turkey and hence our president. This treacherous network added to their betrayals by targeting our president with ads filled with lies. Their attacks on our president stem from their enmity towards our people,” Çelik tweeted.

Following the reaction from the AKP, the Ankara Chief Public Prosecutor’s Office said it had launched an investigation into the people responsible for putting up the billboard in New York City.

STOP ERDOGAN: Raise your voice for the grave human rights violations in Turkey. This is the heart of New York City. #Fight4WomenTurkey pic.twitter.com/zZDV1EeEON

Scores of Gülen movement followers were forced to flee Turkey to avoid a government crackdown following the coup attempt. Some had to take illegal and risky journeys in dinghies to Greece because their passports were revoked by the government.