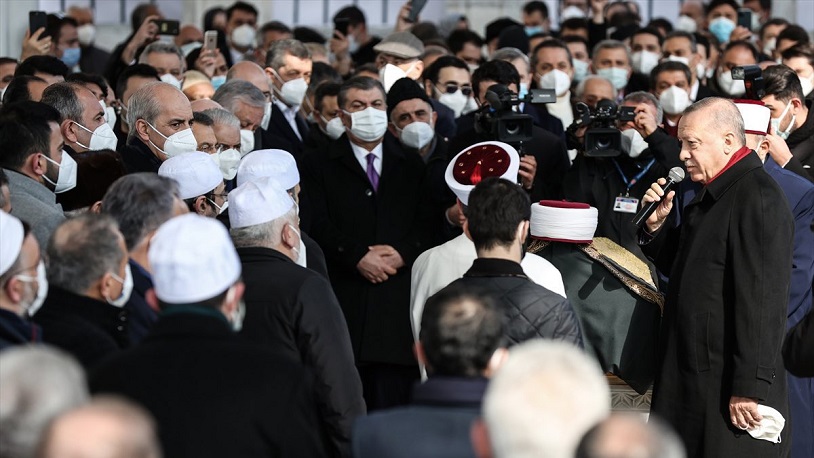 Turkish Health Minister Fahrettin Koca has apologized for the violation of coronavirus restrictions at a crowded funeral ceremony he recently attended, along with many other senior members of the ruling Justice and Development Party (AKP), local media reported on Wednesday.

According to COVID-19 restrictions imposed in Turkey, people are not allowed to hold funeral or wedding ceremonies in groups of more than 30.

Video footage circulating on social media showed hundreds packed together in a confined space ahead of and during the ritual prayer for Saraç, which was also attended by Turkish President Recep Tayyip Erdoğan.

“I didn’t foresee that social distancing would be disregarded [during the funeral] and that such a [crowded] scene would emerge. But should I have foreseen that? Yes, I should have. I would like to apologize for the appearance that emerged during the funeral,” Koca told reporters in parliament on Wednesday.

Erdoğan has also recently attracted criticism for holding crowded rallies in a number of provinces, especially after he bragged about how packed the crowd was while giving a speech at an AKP meeting held in the Black Sea province of Rize.

Erdoğan was criticized for his double standards by scores of social media users who argued that the president and his party were using the pandemic to implement regulations that serve their sociopolitical agenda.

Meanwhile, the Birgün daily reported that AKP member Emre Cemil Ayvalı, who had recently attended a party meeting in the western province of İzmir, said that his COVID-19 test came back positive.

Turkey is expected to gradually normalize from coronavirus restrictions as of March 1, but a variety of restrictions, including curfews on weeknights and partial weekend lockdowns, are still in effect.

As of Feb. 25, over 7.97 million people had received at least one dose of the coronavirus vaccine as part of a mass vaccination campaign started by the Turkish government on Jan. 14. More than 1.39 million of the vaccine recipients have been offered a second dose, according to health ministry data.