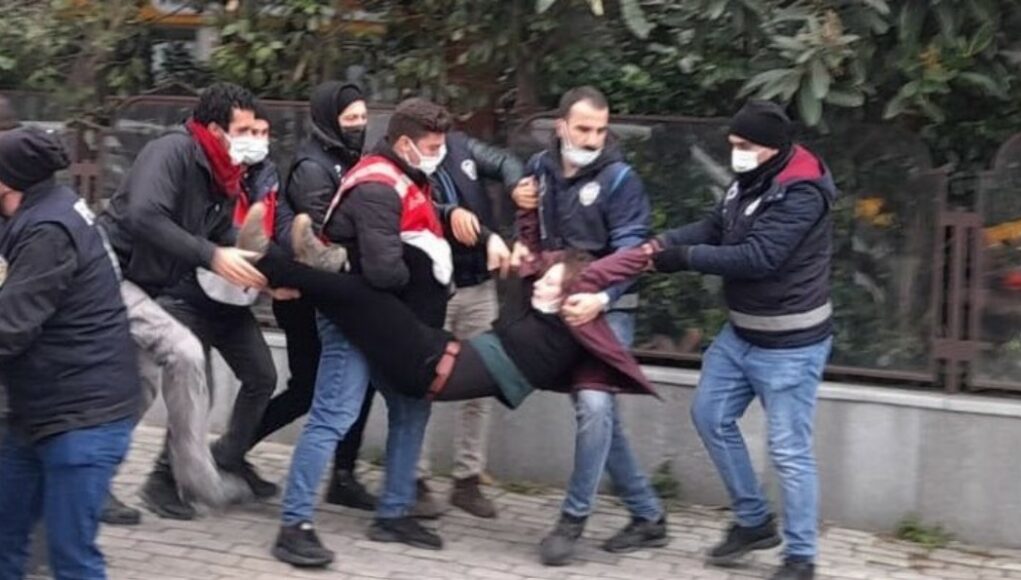 Dozens of arrests were made in İstanbul on Monday after riot police dispersed students who tried to hold a demonstration outside Boğaziçi University protesting the earlier arrest of fellow students over a poster depicting the Kaaba, Islam’s most sacred site, with LGBT flags, Agence France-Presse and Turkish media outlets reported.

A video circulating on social media from the scene shows a scuffle between police and students after a police officer is seen shouting at students to “look down.” Following the officer’s warning, police are seen attacking and dragging students away from the scene.

Dozens of students detained near @UniBogazici campus as they wanted to protest the earlier arrest of their friends, according to student solidarity groups. Boğaziçi students and academics have been protesting the appointment of a new rector for a month. #Turkey #BogaziciAblukada

Following the emergence of the footage, Boğaziçi students and students from other universities took to Twitter and made  #AşağıBakmayacağız (We will not look down) a trending topic, expressing outrage over the police officer’s conduct.

“Keep looking up. There may be a rainbow waiting for you.”#AşağıBakmayacağız pic.twitter.com/kXpKv8JhiU

Turkey was hit by a wave of student protests last month after President Recep Tayyip Erdoğan appointed a loyalist as the head of Istanbul’s prestigious Bogazici University.

They spread to other universities before subsiding after the deployment of a heavy Turkish police presence around campuses and on the streets.

During one demonstration last Friday protestors hung a poster across from the new rector’s office depicting the Kaaba in Mecca and the LGBT movement’s rainbow flag.

Turkish police accused four people of “inciting hatred among the people.” Two of them have been remanded in custody, and the other two put under house arrest.

Last month’s student rallies had echoes of the 2013 protests that sprang up against plans to demolish an Istanbul park before spreading nationally and presenting a direct challenge to Erdoğan’s rule.

Students have been trying to keep their protests going through a vigorous social media campaign that sidesteps Turkey’s overwhelmingly pro-government TV channels and newspapers.

Turkish police are detaining protesters in Izmir who gathered for a pride march in support of Boğaziçi students. The march was organised in response to the government's anti-LGBT crackdown at Boğaziçi university. https://t.co/p3ayBmk1xO

Erdoğan last month accused some of those taking part in the student demonstrations of being “terrorists.”

On Monday Erdoğan lashed out at Turkey’s LGBT movement, accusing it of “vandalism” and distancing his party’s youth from its cause.