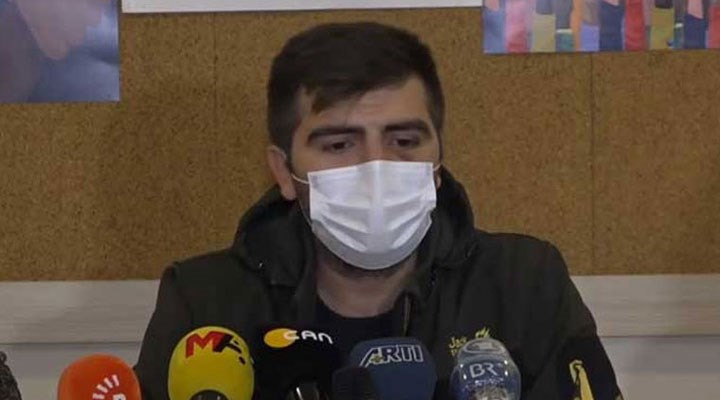 Gökhan Güneş, who returned home nearly a week after he was allegedly abducted by Turkish intelligence officers in broad daylight in İstanbul, has said he was tortured and subjected to threats during his enforced disappearance, local media reported on Tuesday.

Missing since around noon on Jan. 20, Gökhan returned home on his own, reportedly after he was left blindfolded in İstanbul’s Başakşehir district, where he works as an electrician and was abducted nearly a week ago, around 6 a.m. on Tuesday.

With bruises on his face and hands, Gökhan later on Tuesday made a statement at the İstanbul branch of the Human Rights Association (İHD), telling of the torture he was subjected to during the days he was missing.

“They tortured me from time to time. This included electric shocks, beatings and pouring ice-cold water over me. They did this to me either while I was naked or wearing only my underwear. They also threatened me with rape,” he said.

Gökhan added that his torturers also asked him to cooperate by serving as an informant.

“They asked me whether I knew who they were. When I told them they were probably from [Turkish] intelligence, they remained silent. Sometimes they told me they were ‘the invisibles’,” Gökhan further stated.

Commenting on the reason for his abduction and the week-long torture, he said they took place because of his political identity as a socialist.

“Many similar incidents involving socialists took place in the past. These emerged as part of a policy in the 1990s. They continue carrying out the same policy today, and they will do so in the days ahead. But this is a social struggle rather than an individual one … and they know that they can’t silence us like this.”

Gökhan’s sister Nurhayat told the Etkin news agency (ETHA) on Jan. 21 that they suspect he was abducted by government officials because it had happened before.

“He was briefly detained two years ago, and the officers let us know about it a day after it happened. He has been followed and harassed from time to time. They attempted to abduct him before,” she added.

Sezin Uçar, a lawyer representing the Güneş family, told BBC Turkish service that Gökhan had previously been kept behind bars before he was acquitted of charges related to anti-war demonstrations.

Enforced disappearances, which were common in Turkey during the 1990s, made a reappearance following a failed coup in July 2016, according to a report recently drafted by Republican People’s Party (CHP) deputy Sezgin Tanrıkulu, who is also a prominent human rights activist and deputy chair of the Human Rights Committee in parliament.

The country’s intelligence agency has reportedly abducted dozens of people since 2016, with some 24 victims reporting, after they were found, that they were subjected to harsh torture during the time they were missing.