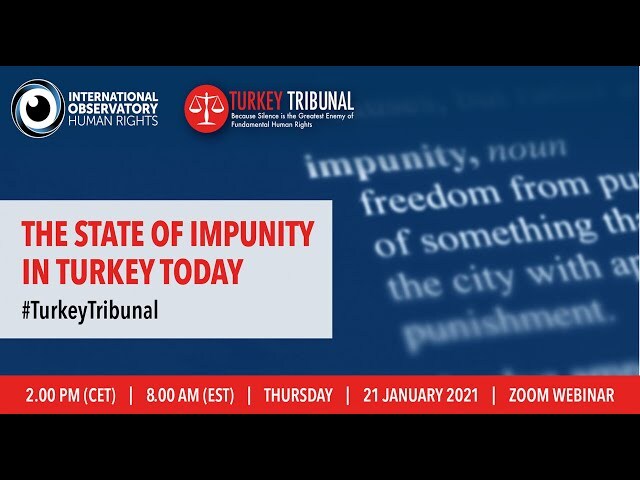 The Turkey Tribunal, a civil society-led symbolic international tribunal to review and deliver judgment on Turkey’s human rights record, held a webinar on Thursday to discuss the question of impunity in the country, with the participation of politicians, experts and activists.

The event was hosted by Johan Vande Lanotte, a Belgian professor of law who initiated the Turkey Tribunal project.

Emre Turkut, a researcher from Uppsala University in Sweden and one of the rapporteurs for the initiative, said the report that he drafted, “Impunity in Turkey Today,” focused on whether there are adequate ways in Turkey to ensure effective investigation of allegations of torture and ill-treatment and, if there are not, whether one can speak of an organized and institutionalized impunity that prevents effective and meaningful investigation.

Turkut said Turkish legislation has clauses making it difficult or impossible to prosecute officials over abuses, such as in the case of the assassination of Turkish-Armenian journalist Hrant Dink, in which some of the investigative procedures were blocked because the necessary authorizations for the prosecution of government officials were not granted.

Turkut said the problem of impunity became much more pervasive after a failed military coup in July 2016 and that about 90 percent of torture-related complaints have not been investigated in recent years.

Orsola Casagrande, co-author of the report “Fight Impunity,” said the silence of the international community in the face of crimes against humanity contributes to impunity. She pointed out that Turkey’s military invasion of the neighboring Syrian province of Afrin three years ago has led to horrific crimes.

Marie Arena, Belgian MEP and the chair of the European Parliament’s Subcommittee on Human Rights, said impunity was a priority for the subcommittee.

“When there is no access to justice, people pay the price twice,” Arena said.

On the question of tackling impunity on a multilateral level, Arena said she hopes that with the taking office of US President Joe Biden, the EU and the US can work together to promote human rights. She added that during the Trump administration the EU felt alone in defending them.

Arena said they are working in the Parliament on a due diligence mechanism to address the question of European companies that are aligned with authoritarian regimes around the world and to hold these companies to account for human rights violations occurring in countries such as China.

With regards to the EU stance on Turkey, Arena said the divisions seen in the EU Council sometimes make it impossible to impose sanctions on Turkey.

Michael Polak, a barrister from the Church Court Chambers in the UK, said he has teamed up with the Arrested Lawyers Initiative, a group of exiled lawyers from Turkey, in order to target impunity and go after those responsible for violations against lawyers and other victims, in a joint initiative called “Turkey Human Rights Accountability Project.”

He said within the framework of the project they are particularly looking into Turkish prosecutors, who wield an inordinate amount of power, as well as police chiefs under whose watch alleged incidents of torture took place.

Polak said after Brexit, the UK will have to do develop its own sanctions regime.

“Because the UN system is failing us, because of the veto power of countries like Russia and China, there seems to be a trend towards non-UN actions,” Polak said.

The event also featured the accounts of Erkan Kurkut, the brother of Kemal Kurkut, who was shot dead by the police in 2017 during Newroz celebrations in Turkey’s predominantly Kurdish Southeast, and Natali Avazyan, a prominent human rights activist especially known for her advocacy in favor of female political prisoners and their children who are imprisoned alongside them.