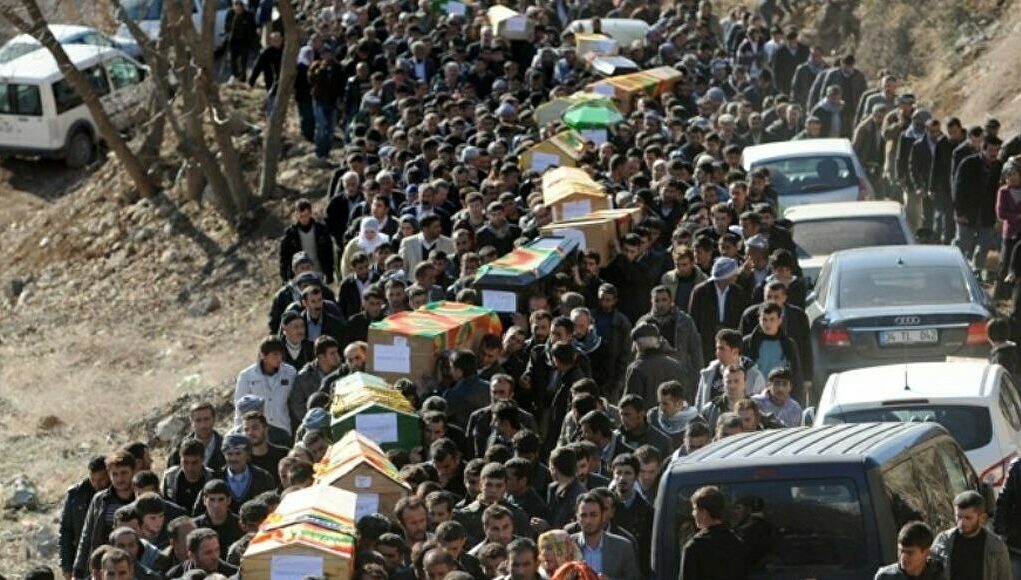 On the ninth anniversary of the killing of 34 people in southeastern Turkey by Turkish military jets, the families of the victims are still seeking justice since not a single person has stood trial in connection to the tragedy so far.

Thirty-four young Kurdish civilians, all male, were killed on Dec. 28, 2011 when Turkish Armed Forces (TSK) jets bombed them after they were mistaken for terrorists from the Kurdistan Workers’ Party (PKK). The incident took place in the Uludere district of Şırnak on the Turkish-Iraqi border.

The civilians were from low-income families in Şırnak who relied on the smuggling of oil and goods from Iraq to make a living.

Turkish government officials promised to bring those responsible for the killings to justice. However, not a single person has appeared in court so far over their role in the Uludere incident.

“We are mourning every day, crying every day. It is as if the massacre is being carried out every day, their bodies are before our eyes. We want justice to be served, we want peace. Our demands are considered a crime. They want the Roboski [the Kurdish name for Uludere] martyrs not to attract any public attention. We will keep their memory alive as long as we live,” said Fadile Tosun in remarks to Deutsche Welle Turkish service.

Tosun is the mother of Mehmet Ali, one of the victims of the Uludere tragedy.

The mother said her son was preparing to get married and was planning to buy a car with the money he would earn from smuggling before his death but that all his dreams had been stolen from him.

Some families of victims faced legal action following the incident. Mehmet Ali’s father, Zeki Tosun, is one of them, the subject of three investigations due to his call for justice for the Uludere victims.

According to the father, those cases were filed because he speaks about the Uludere victims and wants justice.

“We are in such great pain. Instead of justice being served, we are investigated and accused. We want to know the reason for this betrayal of Uludere. So far we have not seen any steps from the government or the judiciary [for justice],” said the father.

In January 2014 a military prosecutor refused to open a case for five suspects in the incident, claiming they were doing their job and that the bombardment of civilians was an “unavoidable mistake.”

When the families took the case to the Constitutional Court, the top court rejected their application on the grounds that there were missing documents.

The families’ search for justice also failed at the European Court of Human Rights (ECtHR) on the grounds that they had not exhausted domestic remedies.

Servet Encü, one of three survivors of the attack, told Deutsche Welle that although nine years have passed since the tragedy, he still wakes up screaming. Encü fears for his life and thinks he may be killed because he is one of the few witnesses of the incident.

“It was hell,” he says, remembering the day of the bombing.

“When the aircraft discharged the bombs, they fell on my friends. The force [of the blast] threw me 20 meters. Bomb fragments, body parts and animal remains [mules used in smuggling] rained down from the sky,” Encü said.

According to Ferhat Encü, a former member of the Turkish Parliament who lost 11 relatives in the Uludere incident, the doors of justice are closed to the families of the Uludere victims.

Encü told the Birgün daily that what made the tragedy more traumatic for the families was that they were forced to collect the body parts of their loved ones and have frequently been subjected to harassment for seeking justice.

Encü said the government tried to cover up the massacre by offering money to the families as compensation but failed to do so as the families refused the money and demanded a fair trial for those responsible.

Turkish delegation to visit Egypt in May for normalisation talks: foreign minister