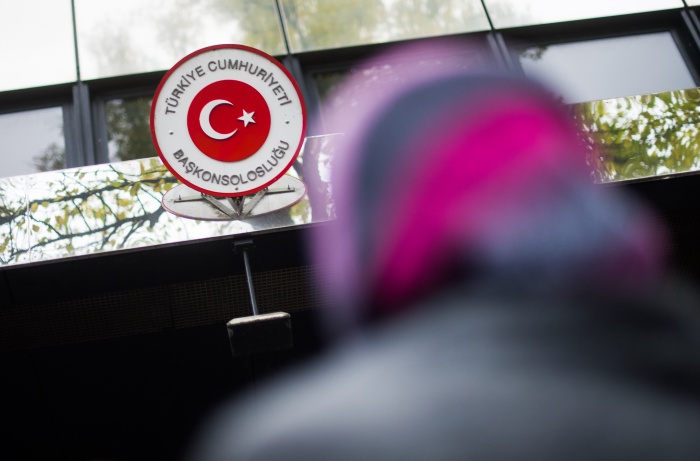 The investigation was based on spying files created at the Turkish Embassy in Seoul between 2016 and 2018.

As a part of Turkey’s global crackdown, Turkish diplomats systematically spied on critics of the president, collected information on Turks living abroad and transmitted it to headquarters while enjoying the privileges and immunities described in international conventions.

In some countries Erdoğan’s envoys coordinated the local elements of intelligence operations carried out by the Turkish intelligence agency (MİT) on foreign soil to abduct Turkish nationals.

The document obtained by Nordic Monitor indicates that Turkish diplomats gathered information on Erdoğan opponents believed to be affiliated with the Gülen movement, a group critical of President Erdoğan, and that Turkish educators, representatives of local associations and businessmen living in South Korea had been profiled by Turkish diplomats.

The information that was reported to the foreign ministry in Ankara was later used in a criminal indictment for a charge of terrorism by Turkish prosecutor Adem Akıncı. According to a December 20, 2018 decision by Akıncı, the Ankara Chief Public Prosecutor’s Office launched a separate investigation (file no. 2018/ 229811) into 17 Turkish nationals who were living in South Korea at the time. They were charged with “membership in a terrorist group” by Akıncı.

The foreign ministry sent lists of profiled Turkish nationals in two CDs to the Ankara Chief Public Prosecutor’s Office, the national police and MIT on February 19, 2018 via an official document for further administrative or legal action, the punishment of their relatives back in Turkey and the seizure of their assets.

Public prosecutor Akıncı, who received the foreign ministry document on February 23, 2018, forwarded the classified CDs, including information on 4,386 Erdoğan critics, to the Organized Crimes Unit of the Ankara Police Department for further action. The police conveyed the results of its investigations to the public prosecutor.

According to judicial documents released by the Ankara 4th High Criminal Court on January 16, 2019, the foreign ministry compiled a long list of foreign entities that were owned and/or operated by people who were seen as close to the Gülen movement, a group critical of the Turkish government, in 92 countries in the Americas, Europe, Asia and Oceania.

Çavuşoğlu said Turkish diplomats assigned to embassies and consulates have officially been instructed by the government to conduct such activities abroad. “If you look at the definition of a diplomat, it is clear. … Intelligence gathering is the duty of diplomats,” Çavuşoğlu told Turkish journalists on February 16, 2020 following the Munich Security Conference, adding, “Intelligence gathering and information collection are a fact.”

In his interview with The Globe and Mail, Turkish Ambassador to Canada Kerim Uras also admitted to spying on 15 Turkish-Canadians. “Any embassy would focus on the threats targeting their countries. That’s what every embassy does,” he told The Globe and Mail.

Turkish Ambassador to Uganda Kerem Alp spoke to the state-run Anadolu news agency in March and confirmed that Turkish diplomats collect information on the business activities of Erdoğan critics living abroad and profile their companies as if they were part of a terrorist organization.

Alp also revealed how the embassy was gathering information on medical staff, educators and humanitarian volunteers working for Ugandan institutions. “There were some FETO followers who had sought to hide in Uganda and were working in schools or hospitals. … They have been disguising themselves as humanitarian workers,” he told the news agency. FETO is a derogatory term coined by the Turkish government to refer to the Gülen movement.

Ankara accuses the Gülen movement of instigating a coup attempt in July 2016. The movement denies any involvement.

The immunities and privileges of diplomats and consular staff are governed by international conventions. However, diplomats enjoying the privileges and immunities described in the Vienna Convention on Diplomatic Relations are under a duty to respect the laws and regulations of the receiving state and to avoid interfering in its internal affairs as detailed in Article 41.

Similarly, consular staff are granted limited privileges and immunities by the Vienna Convention on Consular Affairs, but the host state authorities can start investigations and prosecute any of the personnel if they perpetrate crimes inside or outside the consulate premises, according to Article 43 of the convention.

Ankara has investigated over half a million people from the Gülen movement since 2016, mainly on coup, terrorism or defamation charges.

According to a statement from Turkish Interior Minister Süleyman Soylu on November 26, a total of 292,000 people have been detained while 96,000 others have been jailed due to alleged links to the Gülen movement since the failed coup. The minister said there are currently 25,655 people in Turkey’s prisons who were jailed due to links to the movement.