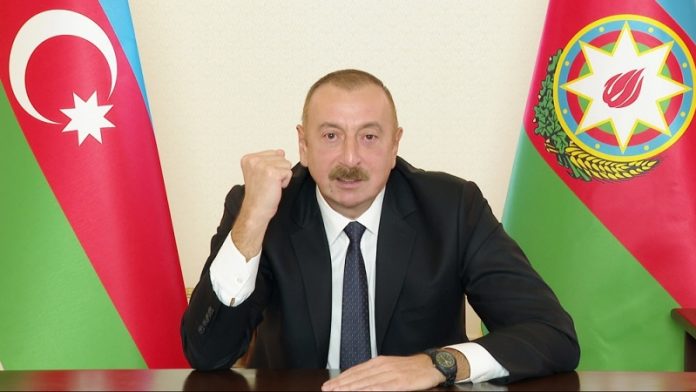 Baku will use Turkish F-16 fighter jets in the event of foreign aggression against Azerbaijan, Azerbaijani President Ilham Aliyev said on Monday.

The country has been embroiled in a decades-long conflict with a defacto Armenian state in Nagorno-Karabakh, an enclave internationally recognized as Azerbaijani territory.

Sporadic clashes turned into an Azerbaijani onslaught on September 27, after both sides accused each other of firing the first shots.

Aliyev acknowledged the presence of Turkish F-16s in Azerbaijan during an interview with CNN Türk on October 10, saying they had arrived for joint military exercises before the heated battle and had to remain there after the maneuvers.

“I am tired of answering. You have satellites — don’t you know what we’re doing? Look around — F-16s are on the ground. Everyone knows they’re on the ground, that they arrived here for the exercises, but with the beginning of the war, they stayed here, “Aliyev said on Monday.

“If any unexpected move comes from Armenia, Turkey will not hesitate to send its soldiers, should Azerbaijan ask for them,” Turkish Vice President Fuat Oktay said during a live broadcast on Wednesday.

Turkey’s defense exports to Azerbaijan had sextupled over the course of nine months in 2020 before the Azerbaijani army engaged with Armenian forces, Deutsche Welle reported on October 14, citing Turkish Exporters Assembly (TİM) data.

According to the TİM data, Turkey exported $123 million in defense and aerospace equipment in the first nine months of 2020. The figure was $20.7 million in the same period of 2019.

Russian news website Kommersant reported on Friday that Turkey is already embroiled in the conflict over Nagorno-Karabakh.

Turkey has backed Muslim-majority Azerbaijan in the conflict over Nagorno-Karabakh, a territory inside Azerbaijan where the population is predominantly ethnic Armenian. The region declared independence in 1991 under the name of the Republic of Artsakh; a state deemed illegitimate by the international community.