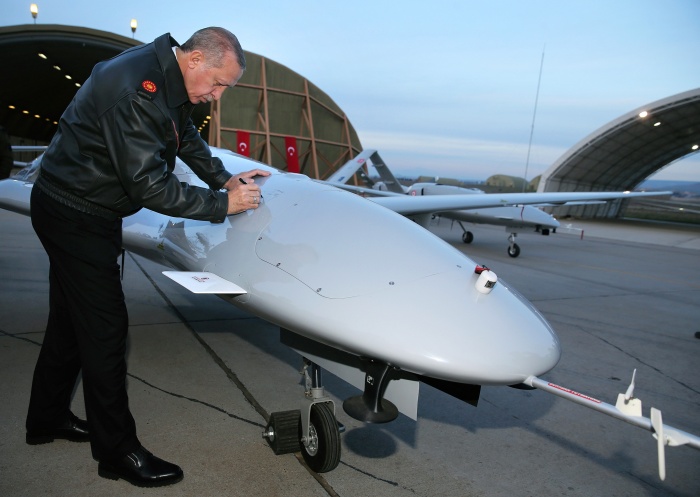 Turkey’s allegedly domestically built drones, which are mainly produced by President Recep Tayyip Erdoğan’s son-in-law, are in the spotlight again, following a Canadian decision to suspend export permits for drone technology to Turkey since it has been using its drones in the recent Azerbaijani-Armenian conflict over Nagorno-Karabakh.

On Monday Canadian Foreign Minister Francois-Philippe Champagne announced that his government would suspend the export of key drone parts to Turkey, including optics and sensor systems produced by Canadian firm WESCAM. As is the case with engine technologies, which are imported from Austria and Ukraine, these high-tech systems featured on Turkish drones cannot be produced locally since Turkey’s domestic industry lacks the necessary infrastructure.

According to some critics, until recently Baykar had been suffering a lack of new sales because its main customer, the Turkish Armed Forces (TSK), already possesses an excessive number of 140 drones, and the company has been able to export only a limited number of drones to countries such Azerbaijan, Qatar, Ukraine and Kuwait. The exports could only be possible with special permits from the importers for the high-tech parts.

However, Turkey’s highly criticized interference in the conflicts in Syria and Libya have helped Baykar as its drones, notably the Bayraktar TB2, have been deployed on the front lines there.

Despite international criticism, Turkey launched a military operation in northeastern Syria in October 2019, with the stated aim of clearing the border area of the Syrian Kurdish People’s Protection Units (YPG) to create a “safe zone” for the resettlement of refugees.

The Erdoğan administration’s move prompted international actors, including the US and the EU, to consider imposing a list of sanctions, ranging from targeted sanctions on Turkish officials and institutions, restrictions on arms sales to Turkey and opposition to loans from international financial institutions to an investigation of reports of war crimes committed by the Turkish army and Turkish-backed Islamist militias. At the time, a US bill targeted some high-profile Turkish officials, including Erdoğan and his other son-in-law, Berat Albayrak. With the passage of the sanctions bill, Erdogan and his family’s net worth could be investigated by US authorities.

However, international threats could not stop Erdoğan from the shipment of arms to Libya, where a weapons embargo imposed by the United Nations was already in place. In January Turkey’s parliament passed a motion allowing the deployment of troops in Libya for one year in support of the Tripoli-based Government of National Accord (GNA).

Many Turkish-supplied drones have allegedly been used and shot down on these two battlefields. The same is the case in the recent Nagorno-Karabakh conflict between Azerbaijan and Armenia, reports claim. In the first week of the clashes, 43 Armenian tanks were reportedly hit by the Turkish TB2 drones. A special report by the Canadian-based Project Ploughshares also confirmed the deployment of Turkish drones in the recent conflict.

According to critics, in addition to international clashes, some local incidents also have played a role in Baykar’s prominence among rivals in the defense sector, notably in the aftermath of a failed coup in Turkey in July 2016. Baykar’s drones were first used in Ankara’s initial incursion into Syria in August 2016, just after the coup attempt. The export of drones to several countries was also made possible in the same period thanks to sweeping powers newly granted to Erdoğan.

The Gülenists, a faith-based group inspired by Erdoğan critic Fethullah Gülen, a self-exiled Turkish cleric living in the US, are blamed for the abortive putsch. The Gülen movement is considered a terrorist organization by Ankara, and its alleged members have been the target of a systematic crackdown conducted by the government.

According to some, a large number of military members dismissed and jailed in the aftermath of the coup were critical of Erdoğan’s internal policies and his plans for Syria.

In a post-coup purge, more than 20,000 military members have been dismissed so far, with in excess of 4,000 of them still under prosecution. As part of the latest purge of Gülenists, Turkish prosecutors issued detention warrants for 167 people, at least 105 of whom are soldiers on active duty, on Tuesday.

Today, Baykar’s unmanned aerial vehicles (UAVs) dominate Turkey’s inventory of drones and the related market, with 107 of a total number of 140 drones.

Baykar’s rapid increase in the sector

Established in 1984, Baykar was initially a producer of spare parts for the automotive industry. The company later changed direction to the defense sector. Until Selçuk’s marriage to Erdoğan’s daughter Sümeyye, Baykar was a small actor in the industry. Since then, the company has made deals worth millions of dollars with the TSK and has become the biggest player in the defense sector.

In fact, the state-owned Turkish Aerospace Industries (TAI) had already started working on a more complicated drone, the ANKA, after October 21, 2007, when some 150 members of the outlawed Kurdistan Workers’ Party (PKK) attacked a Turkish military post in Dağlıca near the Iraqi border.

Sixteen Turkish soldiers were killed in the attack, which raised the question of how such a large group of militants was not detected in advance.

Following the bloody day of fighting, the Turkish state decided to focus on drones, with considerable resources allocated to drone projects. Initially, Israeli HERONs were bought or leased. Turkey’s TAI was also able to access their technology by way of the deals.

Despite the Israeli technology transfer and already-accumulated know-how in drone technologies, TAI’s ANKAs were pushed into the background behind Baykar’s drones.

In a short period of time, Baykar has moved to first place in the sector with its cheaper but lower-level-technology products thanks to the increase in the number of orders for its UAVs.

Are Baykar drones ‘domestic and national’?

In every instance, the company and Turkish officials have argued that Baykar drones are “Turkey’s first domestic and national UAVs.”

However, it is clear given the TAI case that Baykar drones were not the first.

As regards “domestic and national,” the company is not able to independently produce three critical technologies: engine, camera (optics) and remote control systems.

These technologies are so crucial that Baykar drones cannot operate without them, making Baykar drones import dependent. Since the company can only produce its drones due to the existence of export permits for these technologies, it currently faces a serious challenge in view of the recent Canadian move.

For example, the Bayraktar TB2, which is currently deployed in the Nagorno-Karabakh, Libya and Syria war zones, has Rotax 912-iS engines produced in Austria. As for the Akıncı drone, its Ivchenko-Progress Motor Sich AI-450T type Turboprop engine is imported from Ukraine.

Camera systems, another critical part for UAVs, are either WESCAM MX15HD, GosHawk II or MX15 FLIR, all of which are imported from Canada, Germany and the US, respectively. The three countries are now imposing export restrictions due to Turkey’s internationally criticized military operations abroad.

In fact, Canada had temporarily suspended the issuance of all new export permits in April due to Turkey’s incursion into northern Syria in October of last year. Canada later issued an “exceptional permit” for the sale of sophisticated drone optics to Turkey in June. The decision was reportedly made after top Turkish officials made a series of phone calls to their Canadian counterparts to resolve the issue.

The main argument put forward by the Turkish side was Canada’s continued supply of weapons to Saudi Arabia, which has relentlessly bombarded areas under the control of Houthi rebels in Yemen.

In response to the recent Canadian move, İsmail Demir, head of the Presidency of the Defense Industry (SSB), tweeted on October 6 that Turkey would soon start to mass produce an electro-optical system to replace the Canadian WESCAM technology used in the TB-2 drone.

According to the Project Ploughshares report, the electro-optical infrared sensors and camera systems on which Turkey has been working cannot be used in Turkish drones because they are too heavy.

The Bayraktar TB2 drones could not have been developed without the Hornet missile rack, devised and supplied by EDO MBM Technology, located in the UK.

An article in Jane’s Defence Review from May 2016 shows the Hornet was supplied to Baykar, Bayraktar TB2’s manufacturer, at the crucial initial development stage.

Although it is questionable whether Demir’s assertion will come to fruition, it is clear that Baykar enjoys the privilege of help from Turkey’s state-owned institutions, such as Roketsan – a state-owned entity responsible for designing, developing and manufacturing rockets and missiles – and Aselsan – Turkey’s biggest defense company, specializing in military electronics.

For example, Roketsan produced MAM-L and MAM-C ammunition for Bayraktar’s UAVs. Previously imported satellite communication systems have now been produced by Aselsan and used in Akıncı drones. Aselsan has also reportedly been working on a radar system to be used by Baykar.

Moreover, the technological know-how of these institutions, including that of Israeli HERONs, has also been transferred to Baykar.

Turkish authorities have reportedly searched for alternative technologies, such as those of the Chinese. However, it is questionable how efficient Chinese systems are due to the fact that China holds information on its defense systems close to the vest and does not transfer the technology.

Ankara also still hopes that Western suppliers will remove their bans on Turkey when the Azerbaijani-Armenian conflict is over.

Following the coup attempt, Erdoğan took another important step to sustain his autocratic regime by consolidating arms manufacturers and government procurement agencies under his control.

Thanks to a decree-law issued on December 24, 2017 during a state of emergency, Erdoğan took the multi-billion dollar industrial-military complex run by various government agencies under his direct control. The president now chairs the Foundation for Strengthening the Turkish Armed Forces (TSKGV), which has shares in many leading entities active in the defense sector, including Turkish Aerospace Industries (TAI) and Aselsan.

With the same decree, Erdoğan also brought the Undersecretariat for the Defense Industry (SSM) — now the Presidency of the Defense Industry (SSB) — under his control by chairing its executive committee. The SSB is responsible for the procurement of most Turkish weaponry and currently runs more than 460 programs valued at $35 billion.