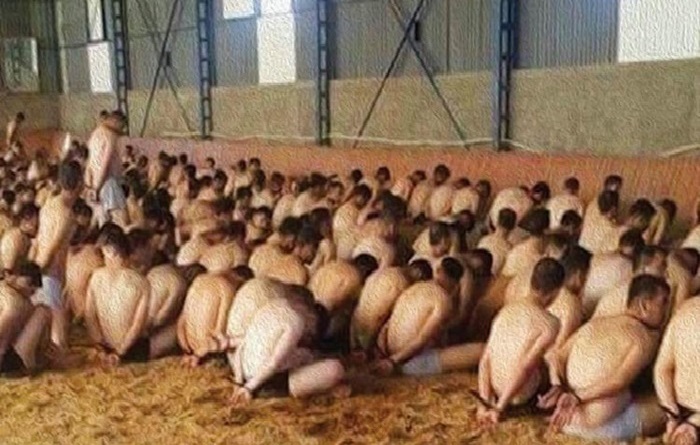 A medical doctor who was assigned to a large detention center in Ankara a few days after a coup attempt in July 2016 has recounted the brutal torture that took place during interrogations in an interview with exiled journalist Cevheri Güven.

The doctor, who wished to remain anonymous, vividly described the soldiers, from lieutenants to generals, most of whom were seriously injured in beatings, sexual intimidationand even rapes.

At that time the Ankara detention center, a sports facility in the garden of the Ankara police headquarters, housed 800 to 1,000 detainees who were accused of orchestrating the failed coup.

The state-run Anadolu news agency ran videos and photos of high-ranking officers who were injured and bandaged after enduring torture.

Some of the detainees later revealed in detail the horrors of the Ankara center, which a 43-year-old ex-lieutenant colonel described as a “concentration camp” from World War II.

The doctor said the detainees were almost naked, allowed to wear only their underwear, and they were packed together like sardines.

Their clothes were stored in a separate room, and police officers were laying claim to the ones they liked.

“As a doctor doing routine checkups, I was asking the detainees if there was ill-treatment during the interrogations, but they had always denied it. Only a few exposed their wounds and said ‘Can’t you see?’ I noted all the ill-treatment and torture in detail,” the doctor said.

The doctor said he later matched images from the media with the people he remembered from those days.

“I wrote Gençer’s report in detail. But the next day I learned that another doctor destroyed my report and wrote a new version,” the doctor said.

The doctor’s account also revealed that some of the soldiers had complained about pain in their rectums, implying rape with a foreign object. But the doctor could not thoroughly examine them since police officers were watching the examinations.

The detainees were usually handcuffed from behind if they were not taken into interrogations. The police officers were tightening the plastic handcuffs, the doctor remembered, and many of them had wounds near their ankles.

There were some 50 generals among the detainees, the doctor said, and they were held in a separate place, where they were denied food and water for days.

In addition to soldiers, the police brought some civilian personnel working at military barracks and even dismissed judges and prosecutors to the Ankara detention center, according to his account.

The defense ministry said nearly 20,000 soldiers have been expelled from the Turkish Armed Forces since 2016, while more than a thousand retired soldiers lost their privileges and pensions.

Last month Erhan Doğan, a 39-year-old schoolteacher, exposed the torture he had endured at the Ankara detention center, where he was put on July 26, 2016 by the police, Al Monitor reported.

Doğan was a teacher at a university preparation school affiliated with the faith-based Gülen movement, which is accused of orchestrating the abortive putsch despite its strong denial of any involvement.

According to Doğan, the detention center was used for civilians after the interrogations of the allegedly putschist soldiers were completed.

Doğan was subjected to various types of torture, from Palestinian hanging to having a bucket of ice-cold water poured over him.

He also heard the screams of young women who were threatened with rape by the police officers. A report by Bold Medya claimed that other people heard those screams and that the women in fact were raped with foreign objects.

Testimony backing such accounts of torture became common after the 2016 coup attempt.

Yasin Ugan and Gökhan Türkmen, who were abducted by Turkish security officials and brought to a secret site for brutal interrogations, testified in court a few months ago, revealing what they had been through.

Interior Minister Süleyman Soylu said on July 15, on the fourth anniversary of the failed putsch, that a total of 282,790 people have been detained on coup-related charges, with 94,975 of them arrested, since the coup attempt.

The Council of Europe’s Committee for the Prevention of Torture and Inhuman or Degrading Treatment or Punishment (CPT) on Aug. 5 published reports on its 2017 periodic visit and 2019 ad hoc visit to Turkey, raising several allegations of abuse of detainees at the hands of the Turkish authorities.