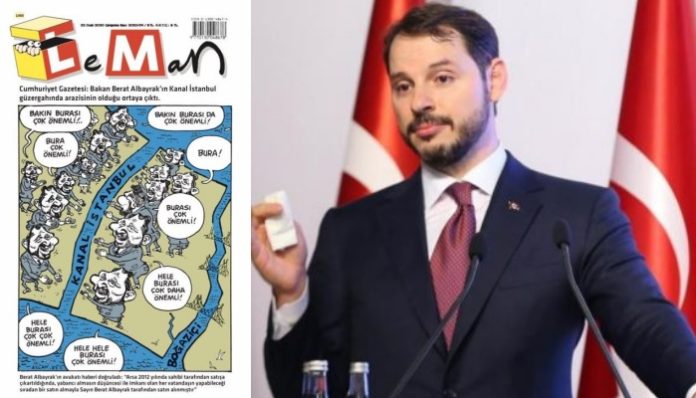 An İstanbul court has imposed an access ban on the online version of a cartoon published by the satirical magazine Leman on its cover on Jan. 22 about Turkish Finance Minister Berat Albrayrak buying land around the route of the Kanal İstanbul project, Deutsche Welle reported.

In January the Cumhuriyet daily ran a report claiming that Albrayrak, who is also the son-in-law of Turkish President Recep Tayyip Erdoğan, bought 3.2 acres of land around the route of Kanal İstanbul, an artificial waterway the Justice and Development Party (AKP) plans to have constructed in İstanbul.

Kanal İstanbul, which Erdoğan dubbed his “crazy project,” will bisect the European side of İstanbul to connect the Black Sea to the Marmara and Mediterranean seas. It is scheduled to be completed by 2023; however, there is widespread public opposition to its construction due to environmental and financial concerns.

According to Cumhuriyet, Albayrak purchased the land in the Arnavutköy neighborhood of İstanbul in 2012, one year after Erdoğan announced his plans for construction of the channel.

The lawyer said Albayrak’s father, Sadık, bought real estate in the same area in 2003, and when the land next to his father’s went on the market in 2012, Berat Albayrak wanted to purchase it to prevent another person from owning land adjacent to his father’s parcel.

The access ban on Leman’s cartoon, posted on its website, was imposed after an İstanbul court ruled for a ban on the news reports about Albrayrak’s purchase of land around the route of Kanal İstanbul following a demand from the minister.

Leman Editor-in-Chief Tuncay Akgün told Deutsche Welle that in the digital era, the censorship imposed on the cartoon had the opposite effect as it was being shared by an “unbelievable” number of people on social media.