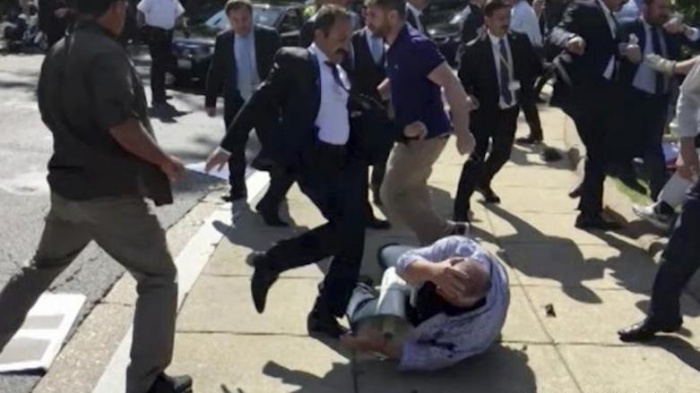 A federal court in Washington, DC, denied a request Thursday by Turkey to dismiss a civil suit by protesters who are seeking damages after they were violently beaten while demonstrating against the visit of the Turkish president to the Capitol in 2017, The Hill reported.

The court struck down Turkey’s argument that it is protected under the Foreign Sovereign Immunity Act in two separate cases filed on behalf of over a dozen plaintiffs, establishing a key marker to hold Ankara accountable in a US court on civil charges.

The case stems from an incident in May 2017 that took place during a visit by Turkish President Recep Tayyip Erdoğan to Washington, where a group of demonstrators, mostly ethnic minorities of Kurdish and Yazidi descent, were violently attacked by Turkish security officers outside the Turkish ambassador’s residence.

Turkey alleges that the demonstrators posed an imminent threat to Erdogan’s safety, but wide-ranging video footage captured that day shows Turkish authorities and pro-Erdoğan supporters running to attack the protestors, surrounding women and elderly men while punching, kicking and throwing them to the ground.

Federal criminal charges were filed against over a dozen individual Turkish security officers shortly after the incident, but were largely dropped a year after the assault, in March 2018, and coincided with the return to the US of an American pastor held in a Turkish prison.

There have been other instances of Turkish security officers engaging in physical violence in the US, with Turkey maintaining it is acting within its rights to exercise security but criticized as using excessive force.

In 2016 Turkish security officers reportedly assaulted journalists and demonstrators outside the Brookings Institution while Erdoğan gave a speech inside, with no charges filed.

Likewise, State Department documents from the day of the Sheridan Circle attacks in 2017 show that Turkish security officers fought with US Diplomatic Security and Secret service in multiple instances throughout the day of Erdoğan’s visit. The documents were released as part of a Freedom of Information Act request filed on behalf of the lawyers for the plaintiffs.

The lawsuit against the Turkish government on behalf of the victims from Sheridan Circle is ongoing, with the opinion by US District Judge Colleen Kollar-Kotelly on Thursday setting up the next phase of the case.

The court rejected Turkey’s argument that it was acting within its own security interests and therefore immune from subject matter jurisdiction in the US — subject to the American court system.