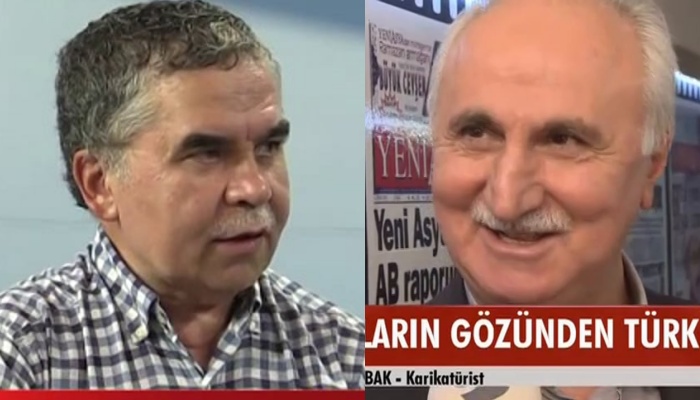 Kazım Güleçyüz, the editor-in-chief of the Yeni Asya daily, a critic of the government in Turkey, and the paper’s cartoonist, İbrahim Özdabak, have been given suspended jail sentences of one year, eight months and one year, six months, respectively, on terrorism charges due to their social media posts and cartoons, according to Güleçyüz.

Güleçyüz tweeted about the jail sentences, saying that he and Özdabak would appeal the ruling. “Justice will be served sooner or later,” he said.

The journalists were handed down the sentences on charges of spreading terrorist propaganda.

In tweets that made their way into the indictment, Güleçyüz questions the suspicious elements in a failed coup in Turkey on July 15, 2016 following which the ruling Justice and Development Party (AKP) launched a massive crackdown on its critics, in particular the Gülen movement.

The AKP government accuses the movement of masterminding the failed coup, although the movement strongly denies any involvement.

In one tweet Güleçyüz says, “In a coup attempt that lasted for hours, the putschists do nothing to the pro-government TV stations and allow them to ‘heroically’ resist the coup.”

“Nobody with a conscience can accept the July 15 anti-coup fight being turned into a massacre of innocent people who had nothing to do with the coup or terrorism,” Güleçyüz says in another tweet.

The reason Özdabak angered the government with his cartoons was because he covered the tragedies that took place in the lives of ordinary people who were accused of coup involvement in the aftermath of the abortive putsch.

He drew cartoons of babies and children separated from their mothers who were jailed on coup charges as well as children who accompanied their mothers in prison.

More than 17,000 women have been jailed on terrorism charges since the coup attempt in Turkey, and around 800 children are currently with their mothers in prison.

In one of the cartoons cited in the indictment, Özdabak depicts the tragedy of a mother who lost her twins in a prison in Sinop province where she was jailed due to alleged Gülen links.

“The pregnant woman, who is jailed, lost her twin babies. Letter from jail to heaven,” a caption on the cartoon says.

As a result of a massive crackdown launched after the coup attempt on followers of the movement under the pretext of an anti-coup fight, more than 130,000 people were removed from state jobs while in excess of 30,000 others are still in jail and some 600,000 people have been investigated on allegations of terrorism.