In a meeting at the White House on Wednesday US President Donald Trump urged Erdoğan to abandon the S-400 system that began arriving in Turkey in July despite threats of sanctions from Washington.

Asked after his meeting whether Turkey would consider not activating the S-400s, Erdoğan told reporters Ankara could not harm its relations with Russia. He also again held out the option of buying US Patriot missiles.

“We said, ‘We see the proposal to remove the S-400s completely while buying the Patriots as an infringement of our sovereign rights and certainly do not find it right,’” he was quoted as saying by broadcasters.

“This is the most binding element: We are engaged in some strategic efforts with Russia,” Erdoğan said, adding that the Turkstream natural gas pipeline, which begins in Russia and runs through Turkey, will start delivering gas to Europe.

“I cannot abandon the S-400s because of Patriots now. If you are going to give us Patriots, give them,” he was quoted as saying.

Largely thanks to good relations between the two presidents, Turkey has so far avoided US sanctions that by law should be triggered by the S-400s. But the United States has banned sales of F-35 fighter jets to Ankara and removed it from a multinational program to produce the warplane.

Erdoğan said he saw a much more positive approach to the F-35 issue from Trump. 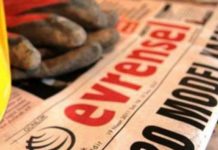