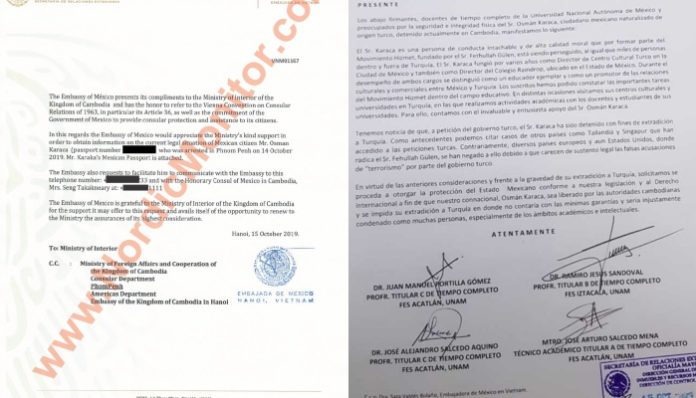 The Turkish Embassy in Phnom Penh attempted to deceive Cambodian authorities to extradite Osman Karaca, a Mexican citizen of Turkish origin, due to his alleged ties to a faith-based Gülen movement, the Nordic Monitor news website reported.

Accusing the Gülen movement of orchestrating a 2016 coup attempt despite its denials of any involvement, Ankara has launched a large-scale crackdown targeting followers of the movement in Turkey and abroad.

To secure his release from detention and ward off an attempt at an illegal extradition, the Mexican Embassy in Hanoi, accredited to Cambodia, had to convey a note verbale to prove Karaca’s Mexican citizenship and attached a copy of his passport in its communication to Cambodian authorities.

Karaca was detained in Phnom Penh on Oct. 14, 2019 by the Cambodian counterterrorism police at the request of the Turkish Embassy. According to the police report, the Turkish diplomatic mission provided a false notice to the police and accused Karaca of holding a fake Mexican passport, resulting in Karaca’s detention based on the embassy’s fabricated argument. The Turkish Embassy then demanded his deportation due to the lack of an international travel document.

The Mexican foreign ministry, its diplomatic mission in Hanoi and its honorary consulate in Cambodia are currently working towards ensuring the release of Karaca, a prominent businessman who acquired Mexican citizenship in 2018. Friends from the National Autonomous University of Mexico have already launched a campaign to prevent the extradition of Karaca to Turkey.

The Mexican Embassy in Hanoi informed the Cambodian interior and foreign ministries of Karaca’s nationality status and shared a copy of his Mexican passport via the note verbale dated Oct. 15.