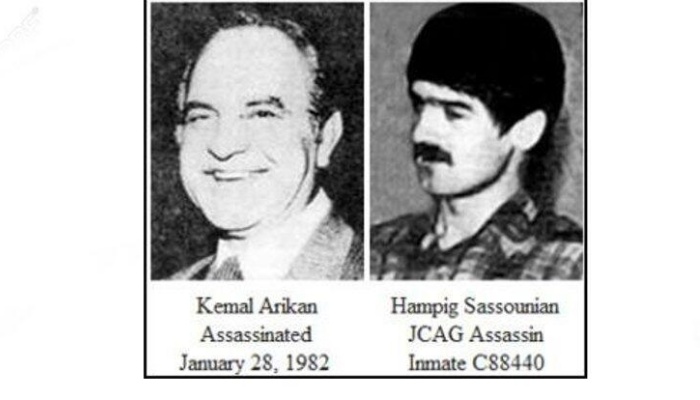 US authorities have rejected a request by the convicted murderer of a Turkish diplomat for an earlier parole hearing after Ankara’s lobbying against it, Daily Sabah reported on Thursday.

Hampig Sassounian, an Armenian militant from the Justice Commandos of the Armenian Genocide (JCAG), gunned down Turkey’s Los Angeles Consul General Kemal Arıkan on Jan. 28, 1982 while the diplomat was waiting at a red light in the Westwood area of Los Angeles.

JCAG had targeted Turkish diplomats in the 1970s and 1980s in revenge for the sufferings of Armenians in mass expulsions from Ottoman territory during World War I.

Sassounian was sentenced to life following the attack and is currently incarcerated in San Quentin Prison in California. He has had a right to request parole since 2007 as he served 25 years under the parole laws of the state of California. The Turkish Foreign Ministry has repeatedly pleaded with US authorities to prevent his parole since then.

The parole request was finally accepted in 2016, but Turkey appealed the ruling. Then-California Governor Jerry Brown canceled the parole ruling in May 2017. Sassounian applied for parole again, but the parole board rejected it again in June 2018, saying that he still posed “an unreasonable danger to society if released.”

He was scheduled to have his next parole hearing in June 2021, but Sassounian sought an earlier hearing. The parole board rejected Sassounian’s plea after Turkey’s response.

Between 1973 and 1993, a total of 33 Turkish diplomats, employees and families based at Turkish diplomatic missions abroad were murdered by Armenian terrorist groups, with the Armenian Secret Army for the Liberation of Armenia (ASALA) being the most infamous one.