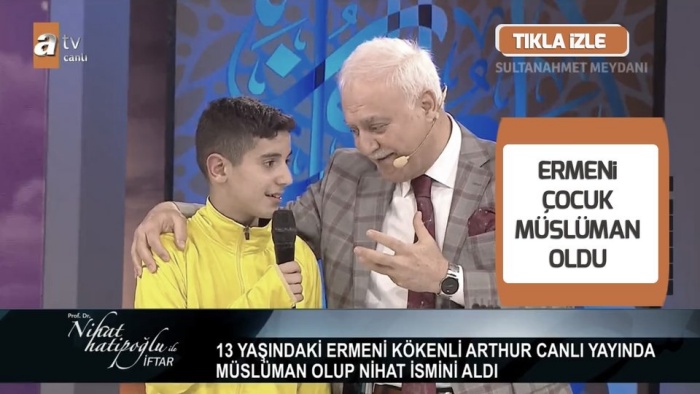 An Armenian boy who allegedly converted to Islam from Christianity on a live Turkish TV program over the weekend was manipulated to do so and is still Christian, according to his mother, the Agos daily reported.

The 13-year-old boy, named Arthur, took part in a Ramadan program hosted by popular Turkish theologian Nihat Hatipoğlu on ATV TV on Saturday and recited the Shadah, one of the five pillars of Islam.

The boy’s mother, Alina Y., who lives in Turkey, spoke to Armenian news website lurer.com and said she had no knowledge of the incident.

The woman also said a Syrian friend of his son told him to take part in the TV program, saying that they would receive gifts and a meal.

Alina Y. also called Garo Paylan, a deputy from the Peoples’ Democratic Party (HDP) who is of Armenian origin, and told him her son did not appear in the TV program with her consent.

Paylan said he would file a criminal complaint against the producers of the TV program with the prosecutor’s office and the Radio and Television Supreme Council (RTÜK), accusing them of involvement in child abuse.