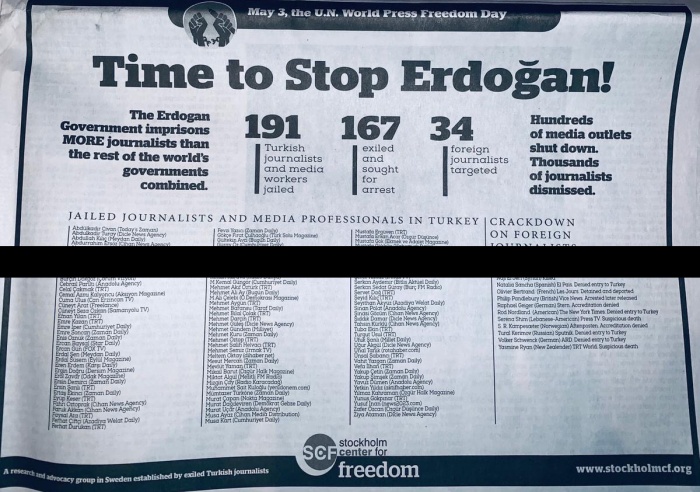 The Stockholm Center for Freedom (SCF), a Swedish-based rights advocacy organization, on Thursday ran an advertisement in The New York Times US edition to mark UN World Press Freedom Day, listing all the journalists who have been jailed by Turkey, stating, “Time to stop Erdoğan,” referring to the country’s president.

“The Erdogan Government imprisons MORE journalists than the rest of the world’s governments combined,” the ad reads.

“Hundreds of media outlets shut down. Thousands of journalists dismissed.”

According to SCF, 191 journalists and media workers are currently in Turkish prisons, while Turkish prosecutors have ordered the detention of 167 others who are living in exile.

In addition to that, 34 foreign journalists were subjected to prosecution in Turkey, while many were denied entry and some were detained and later deported.

“These numbers are not only a statistics; every number represents a journalist who is a husband, wife, brother, sister, father or mother,” Levent Kenez, general secretary of the SCF, told the tr724 news website

He also complained that Turkey observers did not see the whole picture and only support the causes of some famous Turkish journalists who are in jail.

Turkey has become the largest jailer of journalists according to several international rights groups, including Reporters Without Borders (RSF) and the Committee to Protect Journalists (CPJ), since a 2016 coup attempt that gave the Erdoğan government increased authority to use counterterrorism laws against journalists.