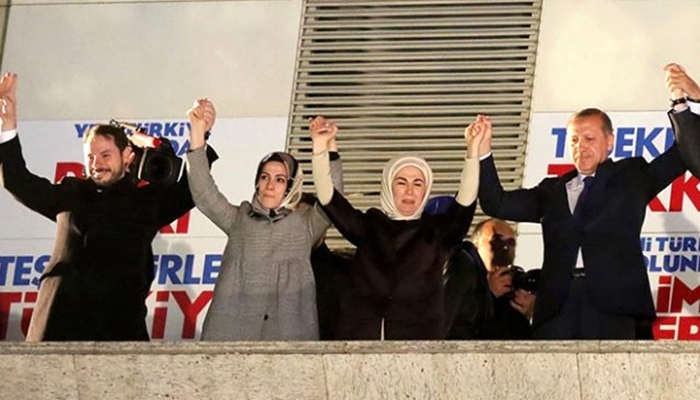 The İstanbul Metropolitan Municipality transferred an exorbitant amount of money to foundations run by President Recep Tayyip Erdoğan’s family members, according to a report seen by Sözcü columnist Çiğdem Toker.

The report indicated that the municipality granted TL 74.3 million ($13.9 million) to the Turkey Youth Foundation (TÜGVA), on whose advisory board Erdoğan’s son Bilal Erdoğan sits, in 2018 and previous years.

TÜGVA was followed by the Service for Youth and Education Foundation of Turkey (TÜRGEV) with TL 51.6 million ($9.67 million).

Esra Albayrak, daughter of President Erdoğan and wife of Finance Minister Berat Albayrak, is one of the executives of TÜRGEV. Fatmanur Altun, chairman of the executive board of the foundation, is also the wife of Fahrettin Altun, a presidential spokesperson.

Current mayor of the İstanbul Metropolitan Municipality Mevlüt Uysal is one of the board members of TÜRGEV, too.

TÜRGEV also made news in the case of Turkish-Iranian businessman Reza Zarrab, who was accused by a US federal court of helping Iran evade sanctions in financial transactions. It was alleged that Zarrab had also made donations to TÜRGEV.

The T3 Foundation, which has Selçuk Bayraktar, President Erdoğan’s son-in-law, on its board of trustees, was also granted TL 41.4 million ($7.75 million) by the municipality.

Some of the grants were given as allocations of office space or equipment, whereas some were in cash.

In addition to Erdoğan’s family, the municipality transferred funds worth millions of dollars to pro-government foundations such as the Ensar Foundation and the Aziz Mahmut Hüdayi Foundation.

According to Sözcü columnist Toker, the transfers were disclosed in the report prepared by the municipality, but the report has never been published.

The total grants given to these foundations totaled nearly TL 850 million ($160 million).