Turkish President Recep Tayyip Erdoğan has called for a revision of the 1995 peace agreement that ended the Bosnian War, saying they failed to address the former Yugoslav republic’s future, The Associated Press reported.

Erdogan said the United Nations should take “a stronger step” in a possible revision of the international Dayton Accords that established a complex government system designed to heal an ethnic divide after the 1992-95 war in which 100,000 people died.

The Turkish leader made the comments during a news conference Wednesday with visiting Croatian President Kolinda Grabar-Kitarovic.

Bosnia’s administration consists of a Serb and a Muslim-Croat entity held together by common, multi-ethnic government. The three-member presidency is held by pro-Russian Bosnian Serb leader Milorad Dodik, who has advocated separation of the Serbs from Bosnia; Muslim politician Sefik Dzaferovic; and Bosnian Croat Zeljko Komsic. 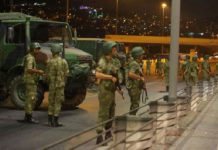