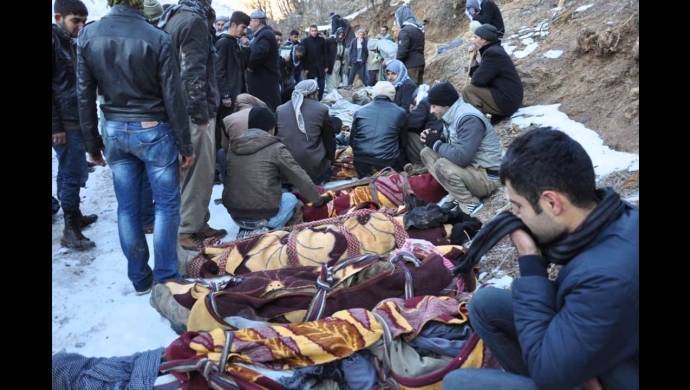 Although seven years have passed since the killing of 34 people near the Uludere district of Şırnak province in southeastern Turkey in a bombardment by Turkish military jets, the families of the victims are still waiting for those responsible for the tragedy to be brought to justice, the Mesopotamia news agency reported on Wednesday.

Thirty-four young Kurdish civilians, all male, were killed on Dec.28, 2011 when Turkish Armed Forces (TSK) jets bombed them after they were mistaken for terrorists from the Kurdistan Workers’ Party (PKK). The incident took place in the Uludere district of Şırnak on the Turkish-Iraqi border.

The civilians were from low-income families in Şırnak who relied on the smuggling of oil and goods from Iraq to make a living.

Turkish government officials promised to bring those who were responsible for the killings to justice. However, not a single person has appeared in court so far due to their role in the Uludere incident.

In January 2014 a military prosecutor refused to open a case for five suspects in the incident, claiming that they were doing their job and that the bombardment of civilians was an “unavoidable mistake.”

When the families took the case to the Constitutional Court, the top court rejected their application on the grounds that there were missing documents.

The families’ search for justice also failed at the European Court of Human Rights (ECtHR) on the grounds that they had not exhausted domestic legal remedies.

Veli Encü, who lost his brother Serhat and many relatives in the tragedy, told Mesopotamia that most families of the Uludere victims have been subjected to pressure and attacks during their search for justice over the past seven years.

“Although it was the perpetrators who should have stood trial, it was always us who were tried,” he said, claiming that government officials have made every effort to cover up the massacre.

Encü also voiced his disappointment over the European court’s decision, saying that the court made a political decision by not taking up the Uludere case.

“The families were thinking that it was only the ECtHR that could punish the perpetrators of this crime against humanity. However, at the point we have reached today, it is possible to say that their hopes have faded away,” said Encü.

After the incident the Turkish parliament named an investigation committee that worked for 15 months and produced a lengthy report, claiming that they could not identify who was responsible for the bombings. “Any evidence implying that the bombing of civilians occurred intentionally cannot be found,” the committee reported.

In February 2012, the Turkish Prime Ministry offered TL 123,000 in compensation to families of the victims, who refused to accept it.