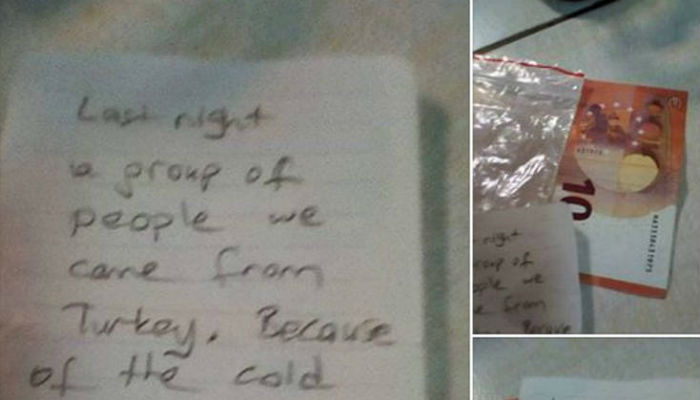 A group of illegal migrants from Turkey who crossed the Maritsa River and reached the village of Nea Vyssa in the Greek regional unit of Evros on Monday night left some money in an envelope for the firewood they took from a cafe in the area, according to the evros24 news website.

The migrants left a 10 euro banknote in an envelope to pay for the wood they took from two sacks in front of a village cafe in the absence of the owner. The temperatures were below zero in the village on Monday night, according to evros24.

They also left a note that was written in English, which said: “Last night, a group of people came from Turkey. Because of the cold weather, we had to make a fire and used your firewood. Please take these euros.”

The owner of the cafe, Dimitris Kazantzis, told Radio Thessaloniki that since the note was written in English, he went to a neighbor to translate it. “I was surprised to see a white envelope, and my surprise was even greater when I saw 10 euros in it,” Kazantzis said, adding that it was the first time he had witnessed such a thing.

The proprietor said dozens of migrants spend time at his cafe every day and that to date there has been no problem.

Last month authorities in northern Greece reported a sharp increase in migrant crossings at the country’s land border with Turkey along with a rise in arrests of human smuggling suspects.

The number of migrants registered and arrested after crossing the border was 3,543 in October, an 82 percent increase over the same month last year, according to police data from the border region of Thrace and the northern city of Thessaloniki obtained by The Associated Press.

Turkey has been the main route for refugees trying to cross into Europe, especially since 2011, when the Syrian civil war began.

In addition, thousands of people have been forced to leave Turkey illegally, most of them via Greece because their passports have been cancelled due to an ongoing crackdown on followers of the Gülen movement, which is accused by the Turkish government of masterminding a failed coup attempt on July 15. The movement strongly denies any involvement in the failed putsch.