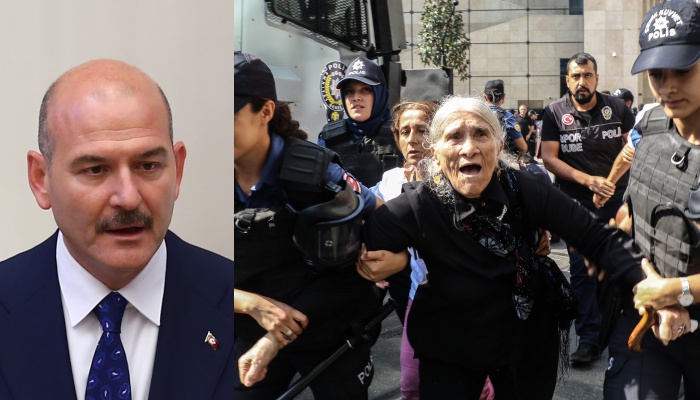 Turkish Interior Minister Süleyman Soylu on Monday defended a police intervention in the 700th meeting of the Saturday Mothers in İstanbul, saying that they wanted to prevent the “abuse of motherhood” by terrorist organizations, the state-run Anadolu news agency reported.

“It’s true we didn’t let them [demonstrate] because we wanted to end this abuse and trickery,” Soylu said at a press conference in Ankara, claiming that “motherhood” had become a cover for terrorist groups through the activities of the Saturday Mothers in İstanbul’s Galatasaray Square.

The Saturday Mothers, who gather every Saturday to bring attention to the cases of people who disappeared while in custody in the 1990s, would have had their 700th meeting on Saturday, but their gathering was prevented by police who used force against the women.

“Should we shut our eyes to those who encourage our children towards terrorism by saying, ‘You’ll be memorialized in the middle of İstanbul’?” Soylu said, adding that the missing “loved ones” were terrorists who died in conflicts rather than being murdered by security forces.

The Saturday Mothers, who first gathered on May 27, 1995 in Galatasaray Square on İstiklal Street, have been the longest-running protest Turkey has ever witnessed. They protest questions unanswered by the authorities about the disappearance or unsolved murder of their loved ones after being taken by security forces, and the lack of justice in court.

However, the 700th gathering of the group was banned by Turkey’s Interior Ministry. The İstanbul police used plastic bullets and tear gas to disperse the demonstrators and detained as many as 50 people including the relatives of missing persons and Human Rights Association (İHD) members. Some of the demonstrators were handcuffed from behind.

Among those detained was veteran Saturday Mothers protest leader Emine Ocak, who reports said is 82.

Unsolved murders and disappearances were frequent occurrences in the late 1980s when tension between two terrorist groups, Hizbullah and the Kurdistan Workers’ Party (PKK), grew violent.

The disappearances are also known as the “white Taurus” (Beyaz Toros) incidents since gendarmerie intelligence and the JITEM counterterrorism unit put people into white Renault Toros cars and never brought them back. Some remains of people who were forced into those cars were found in forests, garbage cans and rural areas, and some people were never found.