Yiğit Bulut, one of the chief advisors to Turkish President Recep Tayyip Erdoğan, has said people who exchange foreign currency for Turkish lira will see a profit in 12 to 48 months.

Bulut’s remarks came in a column he wrote for the pro-government Star daily on Monday.

“Today is the time to return to the Turkish lira from foreign currencies. We will also see how those taking this step will get a profit within 12 to 48 months,” wrote Bulut.

Bulut made the remarks at a time when the Turkish lira has seen a record fall against the US dollar. On Monday, the lira fell as low as 7.24 to the dollar.

On Friday the slide turned into a crash: The lira dropped as much as 18 percent, hitting US and European stocks as investors took fright over banks’ exposure to Turkey.

Due to the huge loss in the value of the Turkish lira, President Erdoğan called on Turks to exchange foreign currencies for Turkish lira.

In his article, Bulut described Aug. 10, when the lira saw a record fall in value, as the financial July 15 of Turkey.

July 15 refers to a failed coup attempt in 2016 during which 249 people were killed and a thousand others were injured.

“Will we surrender to this horrendous financial coup? Will we fight with each other? Never! Keeping in mind the call of our esteemed president, we will stand up for our money, country and companies,” Bulut wrote. 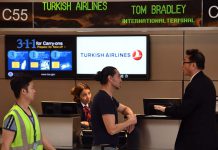 Your way of understanding Turkey
Contact us: Turk[email protected]
©