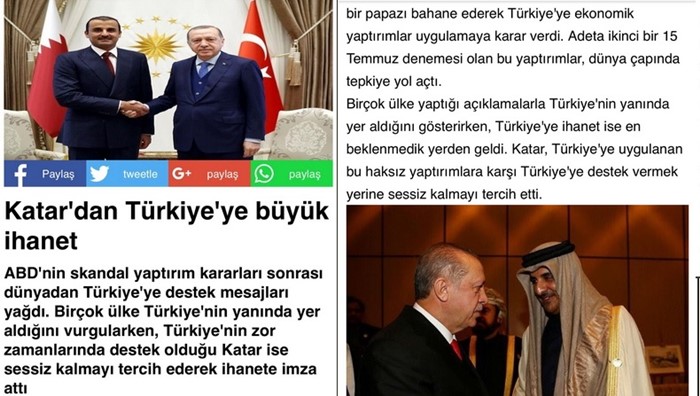 As the Turkish government seeks the support of Gulf countries in the wake of a currency crisis due to US economic sanctions, the pro-government Takvim daily has accused Qatar of betraying Ankara by keeping silent.

“While many countries expressed their support for Turkey against the US sanctions, Qatar, which was supported by Turkey in its difficult times, has betrayed Turkey by remaining silent,” Takvim said under the headline “Qatar’s big betrayal of Turkey.”

The story came after Kuwait’s Al Jarida newspaper reported that Berat Albayrak, Turkey’s treasury and finance minister and the son-in-law of Turkish President Recep Tayyip Erdoğan, visited Kuwait and was expected to visit other members of the Gulf Cooperation Council seeking investment.

Recalling that Turkey vowed to stand by Qatar when Saudi Arabia, Egypt, the United Arab Emirates and Bahrain decided to impose sanctions on Doha in June 2017, Takvim said: “While many countries abandoned it, Turkey supported Qatar, not recognizing the sanctions imposed and standing beside the Qatari government and people with humanitarian and political support. Qatar’s decision to remain silent in the face of the US’s economic war targeting Turkey has created disappointment.”

The Takvim daily is a member of the Turkuvaz Media Group, which is led by Serhat Albayrak, the brother of Minister Albayrak.

The Turkish lira, which on Friday tumbled as much as 18 percent at one point, its biggest daily drop since 2001, plunged to a record low in on Monday’s early Asia Pacific trade, with the total loss in value exceeding 45 percent this year.

Following the court ruling US President Donald Trump and Vice President Mike Pence threatened to impose “large sanctions” on Turkey if Brunson were not freed.

After imposing economic sanctions on two Turkish ministers on Aug. 1 for their role in the detention of evangelical pastor Brunson, Trump on Friday ramped up his sanctions on Turkey by doubling US tariffs on Turkish aluminum and steel imports to 20 percent and 50 percent, respectively.

Hours after Takvim’s article was published, Turkey’s state-run Anadolu news agency reported that President Erdoğan spoke on the phone with Qatar’s Amir Sheikh Tamim bin Hamad al-Thani. According to the report, the leaders agreed to improve bilateral ties in all spheres and keep in close contact.