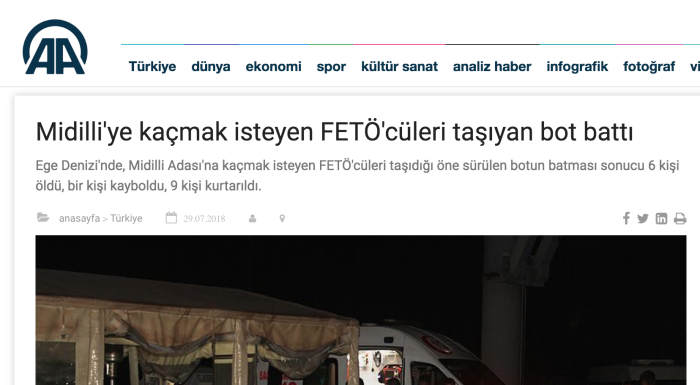 Many Turkish media outlets including those seemingly independent and not surprisingly pro-government organizations have referred to the victims of a boat tragedy in the Aegean Sea on Sunday as terrorists despite the presence of infants among them.

An inflatable boat carrying 16 people affiliated with the Gülen movement en route to the Greek Island of Lesbos capsized in northwestern Turkey on Sunday, leaving six people including three infants dead and one missing.

The victims were infants Y.B.A., B.Y. and N.Y; two women identified as S.A. and S.A.; and a man identified as G.Y. Among those rescued are reportedly teachers, doctors and shopkeepers who were all removed from their posts due to their alleged links to the Gülen movement.

Turkey’s state-run Anadolu news agency, which is strictly controlled by the Turkish government, reported the news with the headline, “Boat carrying FETÖ supporters capsizes in Aegean Sea” to its subscribers, and many news outlets did not bother to use objective language to describe the victims.

FETÖ is a term coined by Turkey’s ruling Justice and Development Party (AKP) to refer to the Gülen movement as a terrorist organization. The AKP and its leader, President Recep Tayyip Erdoğan, accuse the movement of masterminding a failed coup attempt on July 15, 2016, although the movement strongly denies any involvement.

The AKP government has been carrying out an unprecedented crackdown on real and alleged Gülen followers over the past several years, forcing thousands of people to flee Turkey to escape persecution.

The Posta, Milliyet and Sabah dailies as well as news websites such as ahaber, ensonhaber.com and Habertürk and CNN Türk TV all referred to the victims in the boat tragedy as FETÖ members, in other words, terrorists.

Some pro-AKP tolls on social media posted tweets expressing their joy over the deaths of the purge victims in the boat tragedy.

A Twitter user with the nickname “Bilgin Birand” wrote: “Some people are trying to look upset due to the deaths of 3-5 FETÖ members. It is not a lie, I got upset, too, but because the sea got polluted.”

Another Twitter user named Mesut Dumanoğlu complained about the retrieval of the bodies of the victims of the boat tragedy from the sea.

“The dogs of FETÖ drowned in the Aegean Sea. Why do they retrieve this carrion, why do we have to take care of it in our homeland?” he wrote.

Pro-Kurdish Peoples’ Democratic Party (HDP) deputy Ahmet Şık, also a journalist, criticized those who referred even to the babies as terrorists.

“The darkness that creates a killer out of a baby is also skillful at creating a terrorist out of a baby,” he tweeted on Sunday.

Thousands of people have fled Turkey due to a massive post-coup witch-hunt carried out by the AKP government against sympathizers of the Gülen movement in the aftermath of the failed coup.

Many have tried to flee Turkey by illegal means as the government had cancelled the passports of thousands of people.

More than 200,000 people have been investigated over Gülen links, according to the Justice Ministry.