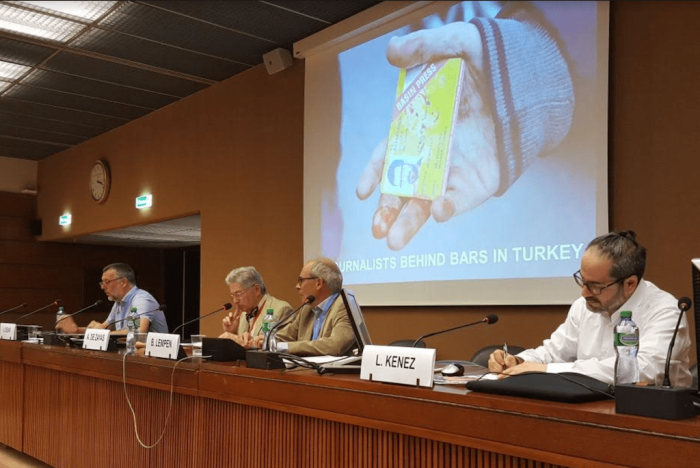 International human rights and press freedom organizations called on the Turkish government to immediately release imprisoned journalists during the 38th session of the UN Human Rights Council (HRC) in Geneva, Switzerland, on Wednesday.

A panel discussion titled “Press Freedom in Turkey,” organized by the Press Emblem Campaign (PEC), a nongovernmental organization with special consultative status at the United Nations, hosted representatives of human rights and press freedom organizations at the historic Palais Wilson Building, the headquarters of the HRC.

Jeremy Dear, deputy secretary-general of the International Federation of Journalists (IFC), said it is obvious that the only aim of the Turkish government is to silence critical journalists. Dear called on the international community to help efforts to stop the misuse of the Turkish Penal Code (TCK) as a tool to jail journalists on trumped-up charges. Dear also suggested that Turkey’s definition of terrorism should be in line with international standards. “The media crackdown in Turkey is the worst in the world,” added Dear.

Blaise Lempen, secretary-general of PEC, underlined that no claims or charges that Turkish public prosecutors included in their indictments have ever been proven true. Lempen also said the oppressive actions of the Erdoğan government were only seen in anti-democratic and dictatorial regimes.

Levent Kenez, the coordinator on Freedom of Press & Expression at the Stockholm Center For Freedom (SCF), said the common and most important demand of jailed colleagues in Turkey is to not be forgotten.

Kenez listed examples of charges and evidence in the indictments drafted by prosecutors during his presentation for the panel. “Even a tweet that has no political or ideological content can be evidence for arrest,” said Kenez.

“Ironically, some jailed colleagues were accused of subscribing to newspapers they had worked for,” Kenez said, adding: “More than 90 percent of the journalists behind bars lost their freedom after a controversial coup attempt on July 15, 2016. That shows how the Erdoğan government has made use of the state of emergency declared right after the coup attempt.”

Kenez also displayed posters of veteran Turkish journalists published and circulated by Turkey’s state-run Anadolu news agency that looked like wanted posters from Westerns. “This is how the Turkish government targets critical journalists in exile and feeds hatred and violence,” he stated.

Kenez explained how he found himself in exile. He was briefly detained after the coup attempt and fled Turkey illegally since another detention warrant had been issued and his passport was cancelled.

Alfred de Zayas, the UN Independent Expert on the Promotion of a Democratic and Equitable International Order and the moderator of the discussion, said: “The situation of press freedom in Turkey is worse than outsiders know. The international community should work much more in order to help voices of the jailed journalist be heard.”

Turkey is the biggest jailer of journalists in the world. The most recent figures documented by SCF show that 244 journalists and media workers were in jail as of June 21, 2018, most in pretrial detention. Of those in prison 184 were under arrest pending trial while only 60 journalists have been convicted and are serving their time. Detention warrants are outstanding for 142 journalists who are living in exile or remain at large in Turkey.

Detaining tens of thousands of people over alleged links to the Gülen movement, the government also closed down some 200 media outlets, including Kurdish news agencies and newspapers, after a coup attempt in Turkey on July 15, 2016.