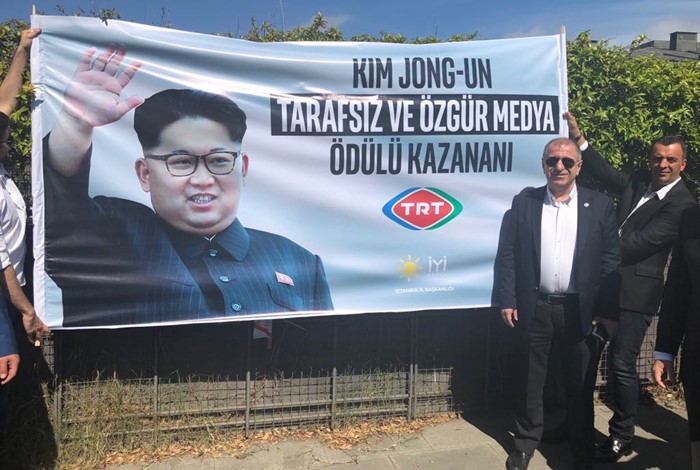 In a move to protest the state-run Turkish Radio and Television (TRT), which has been criticized for acting as the mouthpiece of Turkey’s ruling Justice and Development Party (AKP) government, the İYİ Party has given the station a “press freedom award” in the name of North Korean leader Kim Jong-un.

İYİ Party deputy Ümit Özdağ and other party officials on Thursday held a demonstration outside TRT offices in İstanbul’s Ulus neighborhood in protest of the station’s biased coverage and discriminatory attitude toward the opposition parties.

Özdağ said the attitude of TRT can only be found in North Korea, where the media is strictly controlled by the government and acts as its mouthpiece.

The İYİ Party officials left a banner and a cup as an award in front of the TRT building after the protest.

“The winner of the Kim Jong-un objective and free media award is TRT,” says a banner bearing the station logo.

According to calculations, the TRT gave the AKP and its election partner the Nationalist Movement Party (MHP) 37 hours of airtime in May, while it gave three hours to the main opposition Republican People’s Party (CHP), nine minutes to the İYİ Party and zero to the pro-Kurdish Peoples’ Democratic Party (HDP) and the Felicity Party (SP) in the same period.

“We are giving them a North Korean award. Let them be happy with this,” Özdağ said.