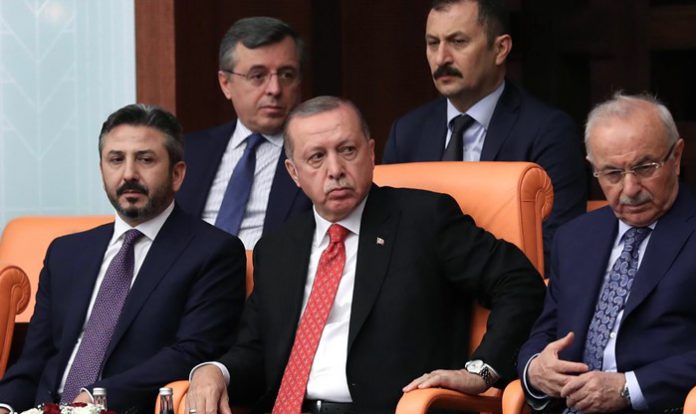 Turkish President Recep Tayyip Erdoğan has said his ruling Justice and Development Party (AKP) government will terminate an ongoing state of emergency in the country as the first thing it will do if it comes to power again following the June 24 general election.

Turkey will hold snap presidential and general elections on June 24 in which Erdoğan is running as the AKP’s presidential candidate.

The state of emergency was declared in the aftermath of a failed coup attempt in Turkey in July 2016 and has been kept in force by the government despite repeated calls from opposition parties, the EU and national and international rights organizations to remove it.

Speaking during a live broadcast on 24 TV on Wednesday night, Erdoğan said: “If I continue to be in this post after June 24, my first job will be to end OHAL [state of emergency]. There is not the slightest [negative] reflection of OHAL on election campaigns. Give me an example. Which campaign has OHAL affected and where?”

Despite calls from opposition parties to the government to terminate the state of emergency before the elections so that they can be held in a democratic and fair environment, Erdoğan has insisted on keeping it in force.

Opposition parties such as the Republican People’s Party (CHP), the İYİ Party, the pro-Kurdish Peoples’ Democratic Party (HDP) and the Felicity Party (SP) have all promised to eliminate the state of emergency in their election manifestos.

In the AKP’s election manifesto, however, the party makes no promise to remove it, saying that it will keep the state of emergency in place “until our national security and the peace of our citizens are fully maintained.”

The state of emergency was declared for three months on July 20, 2016 due to the failed coup attempt on July 15, 2016. It has so far been extended seven times, the last time being in April.

The state of emergency has granted Erdoğan and his government extraordinary powers. Under it, the government has pressed ahead with many controversial decrees that have the force of law and are not required to be approved by Parliament. In line with these decrees, more than 150,000 people have been purged from state institutions on coup charges.

In the meantime, CHP presidential candidate Muharrem İnce responded to Erdoğan’s remarks about his promise to end the state of emergency after the elections from his Twitter account on Thursday.

“[Apparently] the [results] of the public surveys have saddened Erdoğan, and he has begun to make my promises on TV. He has said he is going to end OHAL after the elections. Why don’t you terminate it now — is there any obstacle for you? Let’s get rid of being a country that holds elections under OHAL circumstances,” İnce tweeted.

He also reiterated his promise to do away with OHAL immediately after taking the presidential oath if he is elected president on June 24.