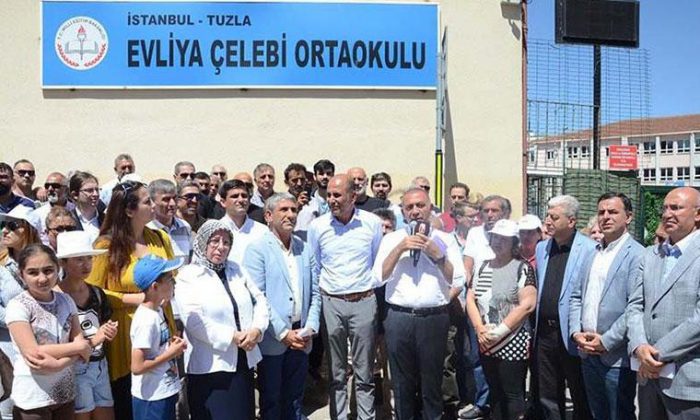 Republican People’s Party (CHP) deputies and members on Tuesday protested a vice principal in front of the Tuzla Evliya Çelebi school after he posted a tweet threatening the attendees of a rally held by CHP presidential candidate Muharrem İnce in Kadıköy on Friday, the Sözcü daily reported.

“On July 15 [when a coup attempt happened] we were empty handed, but this time our hands are full,” Aydın Şen, a teacher and the vice principal of the school, tweeted, comparing the crowd at İnce’s rally to putschists involved in the coup attempt in 2016.

On Friday evening, after Turkish police used excessive force to detain high school students protesting the Turkish education system, Kadıköy residents had gathered to protest the police while İnce at the same time held a rally in support of the students.

The pro-government media likened the protests and the rally to the Gezi Park protests of 2013.

CHP deputies Gürsel Tekin, Mahmut Tanal and Barış Yarkadaş attended the demonstration, where Tekin said officials like the vice principal have been conveying such messages from social media in order to get a promotion.

Tekin also highlighted the appointment of Şen as a poll station official by the Supreme Election Board (YSK), asking how they could trust such a person with the accuracy of vote tallies.