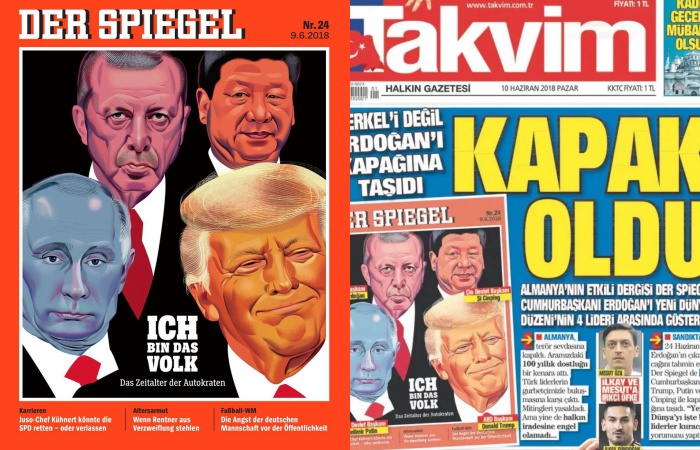 Turkish President Recep Tayyip Erdoğan has voiced satisfaction with making it to the current cover of German magazine Der Spiegel, which according to a pro-government daily presented him as a world leader but in fact portrayed him as an autocratic leader.

“The Germans have a magazine, it put four photos on its cover, one is of me. It said, ‘The leaders shaping the world.’ Thank God. As a son of this nation, I will continue this mission until my dying breath,” Erdoğan said during an election rally in the northwestern province of Kocaeli on Sunday.

Turkey will hold snap presidential and general elections on June 24. Erdoğan is the presidential candidate of his ruling Justice and Development Party (AKP).

On Der Spiegel’s cover are the photos of US President Donald Trump, Russian President Vladimir Putin and Chinese President Xi Jinping as well as Erdoğan.

“Ich bin das Volk, das Zeitalter der Autokraten,“ the magazine’s cover page says, which roughly translates into “I am the people in the age of the autocrats.”

Although Erdoğan is referred to as one of the autocrats of the world, the pro-government Takvim daily on its front page on Sunday reported that Der Spiegel has included Erdoğan among the four leaders of the new world order.

The daily emphasized that German Chancellor Angela Merkel was not on the list, while Erdoğan was.

“Germany has become besotted with terror. It has put aside our 100-year-old friendship. It opposed Turkish leaders meeting with our citizens abroad. It banned their rallies. But it could not stop the will of the people,” Takvim said.

The daily was referring to Germany’s refusal to allow Turkish politicians to hold election rallies within its borders for the Turkish population living in the country, which angered the Turkish government as well as its supporters.