Akşener and her party have insisted on a new constitution and another election after June 24 in order to avoid the transition to an executive presidential system of governance, introduced in a referendum in 2017 that was approved by only a slim margin of votes.

“To make the transition back to a parliamentary system fast and healthy, announcing a roadmap before June 24 would be a reassurance to the nation,” Akşener said.

During a TV appearance on May 31, İnce said restoration of the old parliamentary system would take two years.

İYİ Party spokesperson Aytun Çıray told the Cumhuriyet daily on Sunday that their alliance with the CHP and SP was based on a return to a parliamentary system. Çıray said this campaign was being conducted as if the election will produce permanent executive management; however, they believe there should be an interim government that will pave the way to a system change.

Çıray also asserted that İnce’s campaign appears to deviate from his party’s goals.

“Akşener made this call to bring back into line election campaigns that have deviated from the alliance’s original plan,” Çıray said. 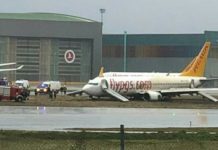 Some bullets used in 2016 coup attempt did not belong to...