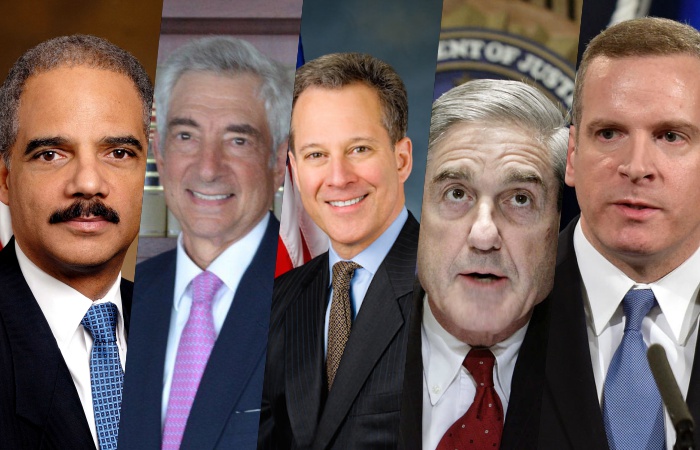 An investigation has been launched into five US officials including members of the judiciary and intelligence community on accusations of terrorism due to the sentencing by a New York court on Wednesday of Turkish banker Mehmet Hakan Atilla to 32 months in prison for violating US sanctions on Iran.

Atilla, an official at Turkey’s state-owned Halkbank, was convicted by a Manhattan jury in January of conspiring to violate US sanctions on Iran.

The investigation was launched into Eric Holder, an American attorney who served as the 82nd attorney general of the United States from 2009 to 2015; the judge of the New York federal court that convicted Atilla, Richard Berman; Eric Schneiderman, an American lawyer and politician who served as the 65th attorney general of New York from 2011 until his resignation in May 2018; former FBI director Robert Mueller; and FBI agent Paul Abbate.

The investigation into these officials was launched due to a criminal complaint filed on Wednesday at the İstanbul Chief Public Prosecutor’s Office by lawyer Burak Bekiroğlu on behalf of Turkish civil society organization TAY-DER, which accuses them of membership in a terrorist organization.

TAY-DER is an extension of an İzmir-based platform that fights against the Gülen movement, which is labeled as terrorist by the Turkish government and accused of masterminding a failed coup attempt on July 15, 2016.

The US officials are accused of carrying out activities in line with the goals of the Gülen movement by means of the US judiciary.

Atilla and Turkish-Iranian gold trader Reza Zarrab and seven other people, including Turkey’s former economy minister and two additional Halkbank executives, were charged with engaging in transactions worth hundreds of millions of dollars for Iran’s government and Iranian entities from 2010 to 2015 in a scheme to evade US sanctions.

Zarrab reached a plea deal with the prosecution and became its star witness in the trial of Atilla, the only defendant other than Zarrab in US custody.

Zarrab testified in early December that he had bribed Turkey’s former economy minister, Mehmet Zafer Çağlayan, in the billion-dollar scheme to smuggle gold for oil in violation of US sanctions on Iran and that then-Prime Minister and current President Recep Tayyip Erdoğan personally authorized the involvement of Turkish banks in the scheme although he was not charged in the case.

Uneasy with the trial in the US, the Turkish government and pro-government circles have accused members of the US judiciary including judge Berman and Preet Bharara, the former US district attorney for the Southern District of New York who launched the trial of Atilla and Zarrab, of membership in the Gülen movement.