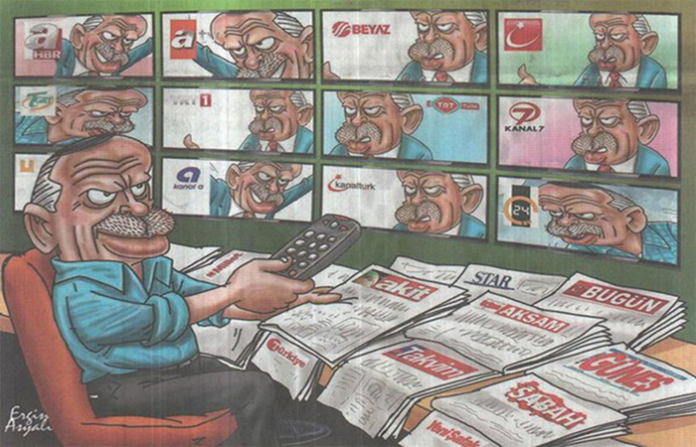 With campaigns in full swing for snap parliamentary and presidential elections in Turkey on June 24, public broadcaster TRT covered the election alliance of the ruling Justice and Development Party (AKP) and Nationalist Movement Party (MHP) for 37 hours, 40 minutes and two seconds, while it allotted all opposition parties and their presidential candidates a total of three hours, 13 minutes and 58 seconds, the Cumhuriyet daily reported.

According to a report released by Turkey’s Radio and Television Supreme Council (RTÜK), which monitors the broadcasting of national television and radio stations, TRT did not give even a second of air time to the pro-Kurdish Peoples’ Democratic Party (HDP) or the Felicity Party (SP) and their presidential candidates between April 17 and May 6.

TRT, which is funded by taxpayer money, broadcast activities of the main opposition Republican People’s Party (CHP) and its presidential candidate Muharrem İnce for a total of three hours, four minutes and 28 seconds in the same period. The İYİ (Good) Party and its presidential candidate Meral Akşener had a chance to appear on TRT for only nine minutes and 30 seconds.

On May 5, İnce called on TRT to broadcast his campaign rallies, warning that he would go to their offices with 130 members of parliament to protest if TRT continues to discriminate against him and his gatherings.

Recalling that TRT is funded by the Turkish taxpayer, İnce said, “If you keep doing this, then don’t take the taxes for TRT from the electric bills of CHP supporters.”

The ABC news website reported that in addition to TRT, private news channels CNN Türk, NTV and HaberTürk, which are owned by businessmen close to President Recep Tayyip Erdoğan, did not broadcast Ince’s rally.

In a similar move, the Hürriyet newspaper, the flagship of Doğan Media, which was bought by the pro-Erdoğan Demirören Group in March, cancelled an interview with İnce to be published on May 6.

Media coverage of the election campaigns of President Recep Tayyip Erdoğan and his ruling AKP and opposition leaders and parties in recent years has been strongly criticized.

A report on March 28 on the media coverage of political parties revealed that pro-Kurdish HDP members have not been invited to appear on news stations NTV, CNN Türk and HaberTürk and that no HDP parliamentary group meetings have been aired since March 17, 2015.

During the last such meeting broadcast by the top TV news channels, the HDP’s then-co-chairperson Selahattin Demirtaş said they would not allow then-Prime Minister Erdoğan to become president.

The report also revealed that as of March 28, no HDP members had appeared as guests on CNN Türk for 650 days, NTV for 883 days and Habertürk for 751 days.

The HDP was only allotted three hours on state-run TRT during the April 1-June 7, 2015 election campaign period, while Erdoğan’s ruling AKP appeared for 188 hours, the main opposition CHP for 14 hours and the MHP 7.5 hours. In the same period private TV channels A Haber, ATV, Kanal 24, Beyaz TV, Ülke TV, TGRT, Kanal 7 and Kanal A covered the HDP for a total of 492 minutes, but 415 of them were taken up by anti-HDP propaganda.

According to the report, President Erdoğan appeared for 806 hours on 12 TV news channels in the month prior to a referendum on April 1, 2017, while the CHP appeared for 480 hours, the MHP for 24.5 hours and the HDP just 58 minutes.