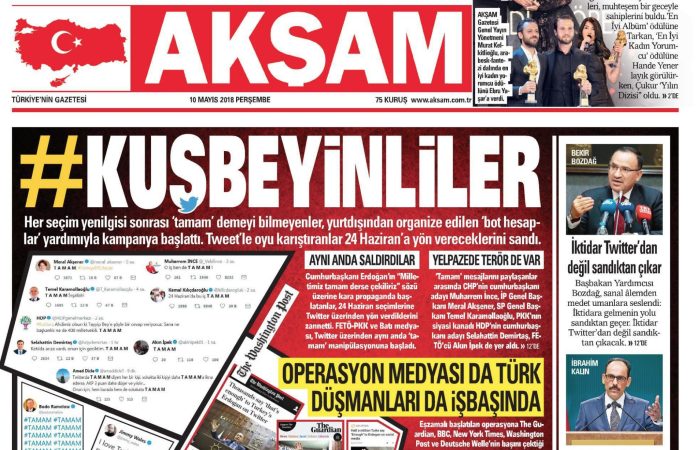 The pro-government Akşam daily on Thursday insulted Turkish Twitter users who joined the T A M A M (OK in Turkish) campaign following a remark by President Recep Tayyip Erdoğan that he would step aside if the nation said okay to that.

The newspaper ran the headline “HAREBRAINS,” accusing the social media campaign of being supported by robot accounts from abroad.

On May 9 ruling Justice and Development Party (AKP) spokesperson Mahir Ünal claimed that most of the tweets were posted from countries where Gülen movement and Kurdistan Workers’ Party (PKK) members are found in large numbers.

After the #tamam hashtag on Twitter had reached hundreds of thousands, AKP supporters started tweeting “DEVAM” (go on). According to main opposition Republican’s People Party (CHP) deputy Barış Yarkadaş, Twitter deleted many “go on” tweets due to the aberrant activity of bot accounts.

“OK” has become a national phenomenon for the Turkish opposition in advance of snap elections on June 24.