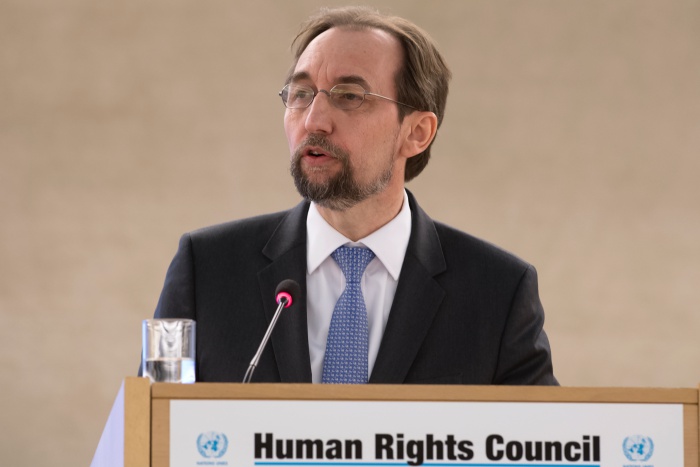 “Protracted restrictions on the human rights to freedom of expression, assembly and association are incompatible with the conduct of a credible electoral process in Turkey,” Zeid Ra’ad Al Hussein, the UN High commissioner for human rights, said in a statement on Wednesday, stressing that these rights are particularly crucial in the context of elections.

“On April 19, a day after the Government of Turkey called for early parliamentary and presidential elections, it announced that it would renew the state of emergency for the seventh time, suspending its obligations under several articles of the International Covenant on Civil and Political Rights, including articles 19, 21, 22 and 25. These articles relate directly to the freedoms of expression, assembly, association and the right to take part in the conduct of public affairs.

“Over the past two years, through successive states of emergency, the space for dissent in Turkey has shrunk considerably, with at least 29 more journalists jailed on terrorism offences in just the last week of April alone,” UN High Commissioner al-Hussein said. “The heavy police presence and arrests during the May Day protests also demonstrated yet again the severely limited space for freedom of peaceful assembly in the country.

“It is difficult to imagine how credible elections can be held in an environment where dissenting views and challenges to the ruling party are penalized so severely,” said Al Hussein in the statement.

The UN High Commissioner called on the Turkish government to immediately lift the state of emergency to enable all of its citizens to participate fully and equally in the conduct of public affairs and to exercise their rights to vote and to stand for election without unreasonable restrictions.

In a recent report on the situation of human rights in Turkey, the UN Human Rights Office expressed concerns that routine renewals of the state of emergency and the extensive use of emergency decrees had led to an erosion of the ability of civil society, the judiciary and the media to serve their essential watchdog roles in the country.

“Elections held in an environment where democratic freedoms and the rule of law are compromised would raise questions about their legitimacy, and result in more uncertainty and instability,” Al Hussein said. “It is in the interests of the people of Turkey that the country’s constitutional order is fully restored, and that human rights and fundamental freedoms are fully respected, in law and practice.”

Turkish President Recep Tayyip Erdoğan, who has scheduled snap presidential and parliamentary elections on June 24, has extended the state of emergency seven times since a controversial military coup attempt on July 15, 2016.

Al Hussein’s office, in a report in March, accused his government of mass arrests, arbitrary sackings and other abuses that in some cases amounted to “collective punishment.”

Turkey has suspended or dismissed more than 150,000 judges, teachers, police and civil servants since July 15. On December 13, 2017 the Justice Ministry announced that 169,013 people have been the subject of legal proceedings on coup charges since the failed coup.

Turkish Interior Minister Süleyman Soylu announced on April 18, 2018 that the Turkish government had jailed 77,081 people between July 15, 2016 and April 11, 2018 over alleged links to the Gülen movement.